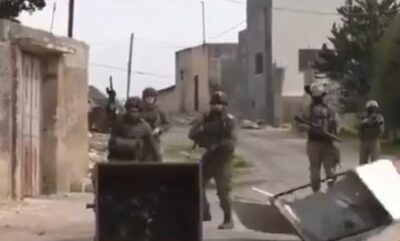 In Kufur Qaddoum, in the northern West Bank, two Palestinian protesters were taken to the hospital with severe injuries after being hit in the head and back, respectively, with rubber-coated steel bullets. Another protester was hit with a sponge grenade and was treated on the scene.

According to Morad Shtewi, coordinator of the Popular Committee Against the Wall and Settlements in Kufur Qaddoum, Israeli soldiers fired rubber-coated rounds, sponge grenades and teargas at the protesters. In addition to the three who suffered from direct hits by the less-lethal ammunition, dozens of villagers suffered from the effects of tear gas inhalation and were treated at the scene by local medics.

In Beit Dajan village, east of Nablus in the northern West Bank, Israeli forces invaded the area and violently dispersed hundreds of participants in a peaceful rally calling for an end to the Israeli confiscation of Palestinian-owned village land.

According to the Palestinian Wafa news agency, Israeli forces have displaced numerous Palestinian residents east of the village to make room for the construction of a new Israeli colonial settlement outpost.

During the demonstration, local sources reported that soldiers opened fire toward the participants, hitting one with a rubber-coated steel bullet in the foot.

Beit Dajan has become a scene for weekly protests against the Israeli authorities’ expansion of colonial settlements onto Palestinian-owned land.

In Kufur Qaddoum, the residents have held weekly protests for over a decade, demanding the return of their land stolen by the Israeli authorities to construct illegal colonial settlements and the Annexation Wall.