Israeli Troops Detain 5 Palestinians, Including a Minor and Former Prisoner 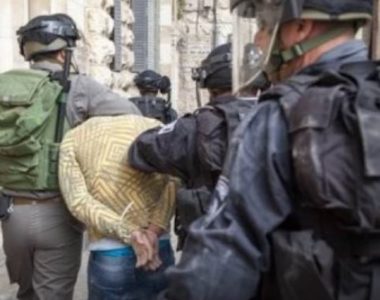 Israeli forces, on Thursday evening, detained five Palestinians from the northern districts of Nablus and Qalqilia, in the occupied West Bank.

Witnesses said that the military detained at least two other Palestinians, including a minor, near Israel’s apartheid wall, built on lands confiscated from Kufur Qaddoum village, in the Qalqilia district.

Israeli forces commit daily incursions into Palestinian towns and villages, as a matter of policy, with the goal of arresting so-called “wanted” Palestinians across the occupied West Bank.

These arbitrary arrest campaigns are a regular occurrence for Palestinian civilians in the West Bank, and 5,000 Palestinian prisoners remain incarcerated in Israeli prisons, including 183 minors.