Israeli Woman Injured In A Stabbing Attack In Jerusalem 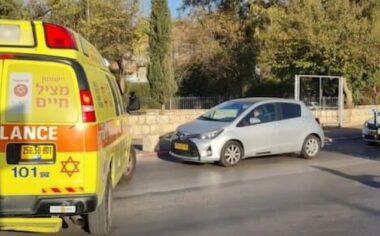 Israeli sources have reported, Wednesday, that a woman was injured reportedly after a Palestinian teenage girl stabbed her in Sheikh Jarrah neighborhood, in occupied Jerusalem.

Israeli sources said the injured woman suffered mild injuries before she was taken to Hadassah medical center in Jerusalem and added that the woman was with her two children, who were unharmed.

The injured woman remained conscious, and her condition has been described as stable.

The Israeli police and the army said they invaded a girls’ school in Sheikh Jarrah and arrested a girl who is suspected of being behind the stabbing. It is worth mentioning that the army violently searched and ransacked the school, before abducting the girl, in addition to two siblings, a teacher, and the principal.

The soldiers also imposed a tight siege on Sheikh Jarrah, preventing the Palestinians from entering or leaving the neighborhood, in addition to attacking many Palestinians, cars, and buses, while military choppers flew overhead.

The soldiers also invaded and searched many schools and alleys in Sheikh Jarrah.

In Sheikh Jarrah, eight families of nineteen households of 87 Palestinians, are at imminent risk of forcible transfer, due to the separate case filed against them before Israeli courts by the settler organization Nahalat Shimon International. Alarmingly, Nahalat Shimon International has previously evicted three Palestinian families of around 67 Palestinians from the neighborhood in 2008 and 2009.