Living under occupation in the West Bank 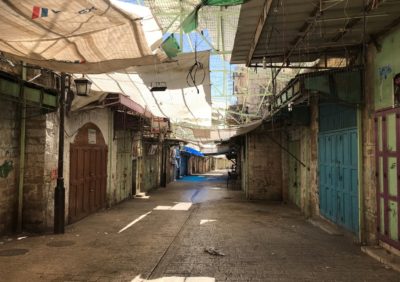 For IMEMC News – Niall ├ō Brolch├Īin: As I strolled through the streets of the Old Town market near the home of Idress Zahdeh, rocks, other missiles, and rubbish were landing on the grills and tarpaulins above my head, which were put there in order to protect the shoppers, shopkeepers, residents, and tourists below from such attacks.

The market I was strolling through was in Hebron ŌĆō Al Khalil in Arabic ŌĆō which is situated in the West Bank, Palestine.┬Ā Hebron is unique in the West Bank in that it is the only city in which Israeli settlers actually live within the city itself.┬Ā In all other cities and villages where there are illegal Israeli settlements, they are situated on the outskirts and suburbs of the city.

The largest city in the West Bank, Hebron has a population of over 200,000 Palestinians, with around 500 Jewish settlers concentrated in and around the Old Quarter.┬Ā These settlers are guarded and protected by about 2000 Israeli soldiers.

The Cave of the Patriarchs is a series of caves under the ground in the Old City.┬Ā It is believed that Abraham and his wife Sarah and their sons Isaac and Jacob and their respective wives Rebecca and Leah are all buried here.┬Ā The site is revered by Jews as the second holiest city after Jerusalem and by Muslims as one of the four holy cities.

Above the tombs now stands the Al Ibrahimi mosque.┬Ā Israel took control of the site after the six-day war in 1967 and divided it into a mosque and a synagogue. ┬ĀIn 1994, American-Israeli Baruch Goldstein massacred 29 Palestinian worshippers and injured 150 others when he opened fire in the mosque during the holy month of Ramadan.

The city was split into two after the 1995 Oslo Agreement and the subsequent 1997 Hebron Agreement.┬Ā H1 is under the control of the Palestinian Authority (PA) while H2 is controlled by the Israelis.┬Ā The Jewish settlement of H2 is widely considered to be illegal under international law.

As a result of Israeli security measures, which include restriction of movement, extended curfews and the closure of Palestinian commercial properties, the Palestinian population in H2 has greatly declined.┬Ā Settler and Israeli forces harassment and violence is also an ongoing major problem.

A 2017 confidential report by the Temporary International Presence in Hebron (TIPH), which covered 20 years of its existence, found that Israel routinely violates international law in Hebron.

The report, which is based in part on over 40,000 reported incidents, states that Israel is in ŌĆśsevere and regularŌĆÖ breach of the rights to non-discrimination laid out in the International Covenant on Civil and Political Rights over the lack of freedom of movement of Palestinian residents of Hebron.┬Ā The report also found that the presence of any Israeli settlement in Hebron is a violation of international law.

I myself witnessed several violations of this law when Israeli soldiers carried out incursions into the PA-controlled H1 area of the city, harassing local youths and firing rubber bullets and teargas at civilians whose only crime was that they were out shopping at the time.

I also witnessed soldiers fire teargas at peaceful protestors during the so-called Trump ŌĆśdeal of the centuryŌĆÖ workshop in Bahrain at the end of June.┬Ā I was overcome by the effects of teargas while taking pictures of the protest.

Several weeks earlier I was also harassed by Israeli soldiers and settlers who have a weekly ritual of parading through the old town market in Palestinian controlled H1 under heavily armed guard.

I recently met with H2 residents and members of the organization Palestinian Human Rights Defenders (HRD), Badee Dwaik and Imad Abu Shamsyh.┬Ā This organization aims to document human rights violations by the Israeli occupation in Palestine.

Human Rights Defenders is a grass-roots, non-partisan Palestinian organization working to support non-violent resistance through popular direct action and documentation of human rights violations committed by the Occupation.┬Ā This project aims to document violations by the Israeli occupation through the distribution of cameras to Palestinian families in areas where violations occur on a continual basis.

Imad captured on video in March 2016 the moment when Israeli soldier Sgt. Elor Azaria stepped up to wounded Palestinian Abed Fatah Al Sharif, who was lying shot on the ground but still alive after an alleged knife attack and shot him fatally in the head.┬Ā According to Israeli newspaper Haaretz, a voice is heard on the video moments before the execution saying, ŌĆ£This terrorist is still alive, this dogŌĆØ.

Azaria was sentenced to 18 months in prison for manslaughter because the incident was captured on video.┬Ā This was later reduced to 14 months and he was released to a hero/s welcome.┬Ā Imad said:

ŌĆ£The video was to be the beginning of much abuse and harassment and many death threats.┬Ā Settlers were constantly coming and attacking my house in full view of and sometimes with the help of Israeli occupation soldiersŌĆØ.┬Ā Imad has documented the settlers firebombing his house on two occasions with Molotov cocktails.

The stress and violence of the attacks was too much for ImadŌĆÖs eldest son Awni.┬Ā He was driven to breaking point and moved to the north of the West Bank when he got a job as a car mechanic.

Badee took me to visit another Palestinian resident of H2, 70-year-old Idress Zahdeh.┬Ā IdressŌĆÖs arm was heavily bandaged and hanging on a sling.┬Ā Idress told me that the day beforehand, he was working in his field at the side of his property when he was confronted by three settlers who knocked him to the ground and beat him before trying to stab him with a large knife.┬Ā Idress said he received his injuries while holding his arm up to try and protect himself.┬Ā He said: 70-year-old Idress Zahdeh in the garden of his home in Hebron, explaining how he tried to protect himself from an alleged attack by knife-wielding Jewish settlers. Photo by Niall ├ō Brolch├Īin

ŌĆ£A group of settlers came and attacked me when I was working in the field.┬Ā While I was on the ground, one of them had a large knife and tried to stab me in┬Ā the neck.┬Ā When I raised my arm to protect myself, he stabbed me in the arm which went right into the boneŌĆØ.

Idress went on to explain to me that when he was at the police station later to make a complaint, they showed him CCTV coverage of the incident as there are lots of cameras around his home and the incident was not on the tape.

He said that he said to them that they ŌĆśhad cut the tapeŌĆÖ.┬Ā When IdressŌĆÖ s son came to the police station to be with his father, they arrested him.┬Ā I found out when I was talking to Idress that his son had just been released on bail, a whole day after the incident.

Idress also claimed that the officer at the police station told him he would have to pay 3000 shekels to be released from the station.┬Ā Idress said that he told the officer, ŌĆśyou will have to take your gun and shoot me firstŌĆÖ.┬Ā He was eventually released when a more senior officer took control of the situation.

I asked Badee if the international community was doing enough to help the plight of the Palestinian people who are living under occupation.┬Ā He said:

ŌĆ£The BDS (Boycott, De-vestment, Sanctions) movement is not enough.┬Ā We must also get the help of governments and media to boycott this regime.┬Ā We are against a racist regime called Israel.┬Ā This regime is killing usŌĆØ.

Perhaps what I will remember most about meeting Idress Zahdeh today was not the fact that he had been attacked and stabbed the day before but the resilience of the man.┬Ā He told me that he had been approached many times by wealthy American Zionists offering him millions of dollars to sell his house and land to them and move out.┬Ā He said he was once offered $6m ŌĆō he refused.┬Ā He said:

ŌĆ£I would rather die a poor man than to give up my landŌĆØ.

No Israeli officials or settlers were available for comment.

« Opinion: All the Signs are That NetanyahuŌĆÖs Political Career is About to Hit the Buffers Visit to Al Fawwar Refugee Camp, Hebron, Palestine, June 2019 »