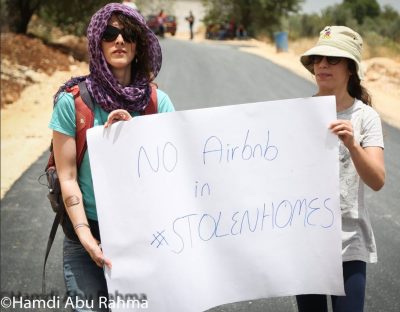 The Popular Committee against the Annexation Wall and Colonies in Bil’in village, west of Ramallah, has reported, Friday, that Israeli soldiers used excessive force against the weekly nonviolent protest, causing dozens of injures, and leading to burning farmlands.

The committee said that dozens of soldiers were deployed at the western entrance of the village, and fired dozens of gas bombs and rubber-coated steel bullets at the local, Israeli and international protesters.

Dozens suffered the effects of tear gas inhalation, while fires broke out in olive orchards, and wheat fields in Khallet al-Fool area, west of the village, due to the intensity of Israeli gas bombs. The lands are owned by a Palestinian identified as Awad Yassin.

The protesters marched from the center of the village carrying Palestinian flags and posters, calling for the release of all political prisoners, especially journalists, and ongoing resistance against the occupation, until liberation and independence.

They denounced the continued imprisonment of the General Secretariat of the Palestinian Journalists Syndicate (PJS), Omar Nazzal, along with around 20 other journalists, in addition to calling for the immediate release of hunger striking detainees, held by Israel under arbitrary Administrative Detention, without charges or trial.

In addition, the protesters carried posters denouncing Airbnb and Remax for listing vacation rentals in illegal Israeli colonies, built on stolen Palestinian lands in the occupied West Bank, including Jerusalem, and called for national unity, liberation and independence.

Coordinator of the Popular Committee against the Wall and Colonies in Bil’in, Abdullah Abu Rahma, called for ongoing popular resistance against the Israeli occupation, and its government that is accelerating the confiscation and theft of Palestinian lands in order to build and expand illegal colonies, and the demolition of homes.