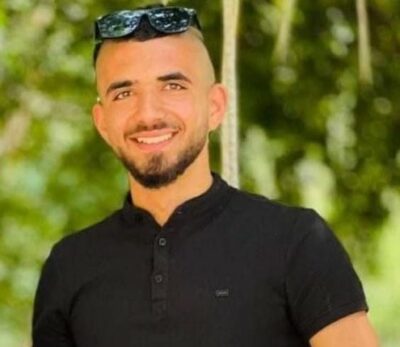 On Sunday, Palestinian medical sources in Jenin said a young man died of serious wounds he suffered a day earlier after Israeli soldiers shot him in Jaba’ town, southwest of the northern West Bank city of Jenin.

The sources said the Palestinian, Kamel Abdullah Alawna, 18, was shot with two expanding bullets, one in the abdomen, causing severe damage to his liver and intestines, and one in the right elbow.

His brother Dr. Mo’taz Alawna said Kamel was instantly admitted to surgery and remained in the Intensive Care Unit until he succumbed to his wounds.

He was shot by the soldiers while walking in an area where protests had been taking place after several army jeeps invaded the town.

The soldiers fired many live rounds, rubber-coated steel bullets, gas bombs, and concussion grenades at the protesters and surrounding areas. Kamel was born in 2004 and was named after his brother, who was killed by the army in 2003; his father is a former political prisoner whom Israel imprisoned for several years.

He was a high school student taking final exams, including an exam scheduled for Monday. After his death, thousands of Palestinians marched in his funeral procession in front of Ibn Sina Specialized Hospital in the town and chanted against the escalating Israeli violations in occupied Palestine before burying him at the local cemetery.

On Saturday, the Palestinian Prisoners’ Society (PPS) reported that the Palestinian woman, Sa’diyya Farajallah, 68, the oldest female detainee imprisoned by Israel, died in an Israeli prison less than seven months after Israeli soldiers abducted her.