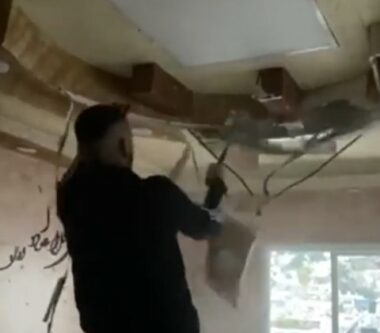 A Palestinian family had to demolish its home, Monday, in Silwan town, in the occupied capital, Jerusalem, in the West Bank, after the City Council gave them one week to demolish it or be forced to pay high fines and fees in addition to the demolition costs.

The Zeitoun local Palestinian family said it built its home four years ago, before receiving a demolition order, but managed to file an appeal a year ago which led to freezing the order.

Adnan Zeitoun, the owner of the property said the family was forced to demolish a section of their home before managing to freeze the demolition order, however, they were slapped with a new order a week ago and had to demolish their property.

The new order instructs the family to demolish the property immediately or face the excessively high fines and fees in addition to the demolition costs if the city uses it workers and equipment.

It is worth mentioning that a week ago, the Israeli authorities demolished a home, owned by other members of Zeitoun family.

On Sunday, The Israeli authorities forced a Palestinian from the Wad al-Hummus area in Sur Baher town in Jerusalem, to demolish his home, allegedly for being built without a permit.

On Saturday, Israel forced a Palestinian to demolish his home in Beit Hanina, north of Jerusalem, rendering him and his family homeless only 45 days after the family moved in.