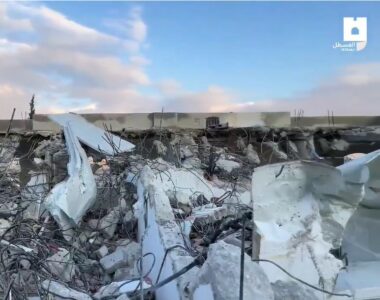 Under the pretext of being built without a permit, Israeli soldiers demolished Tuesday, a Palestinian home in the occupied capital, Jerusalem, displacing the family, including many children.

The soldiers invaded the at-Tour town, in Jerusalem, and demolished a two-story home, owned by the local Karama Palestinian family.

The soldiers also assaulted many family members with clubs and batons and fired a barrage of gas bombs and concussion grenades at the Palestinians who gathered in the area.

The owner of the property said he and his family paid more than 800.000 Shekels in fees, permit applications, and fines, but could not get the City Council to issue a permit for the property and insisted on demolishing it.

“I have children who are now homeless, their schoolbooks are under the rubble,” the owner said, “I hired lawyers and tried all possible legal means to keep the property, but they went ahead and demolished it. God willing, I will rebuild.”

Meanwhile, Israeli colonizers continue to occupy Palestinian lands, in addition to the escalating assault, including uprooting and bulldozing the Palestinian farmlands and the constant destruction of their property.

Updated From:
Palestinian Family Forced To Evict its Home In Jerusalem Ahead Of Demolition
Jan 25, 2022, at 12:46 Israeli soldiers invaded, Tuesday, the town of at-Tour in the occupied Palestinian capital, Jerusalem, in the West Bank, and forced a Palestinian family to remove its furniture and belongings in preparation for demolishing it.

Eyewitnesses said many soldiers and police officers invaded the town, before surrounding a two-story home, owned by the local Karama Palestinian family.

They added that the soldiers assaulted the family before forcing the Palestinians to start removing their furniture and belongings.

The Israeli army claims the building was constructed without a permit from the City Council.

In related news, the soldiers invaded the Ertah area, south of the northern West Bank city of Tulkarem, and obstructed traffic, in addition to invading several neighborhoods, especially the southern area of the city.

Media sources said the soldiers invaded a home owned by the local Karama family and attacked several family members before forcing them to start removing their furniture and belongings.

The sources added that the Israeli army is claiming the home did not receive a permit from the City Council.