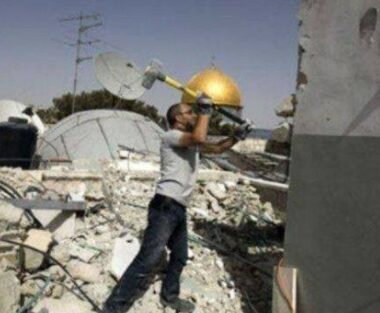 The Israeli authorities forced Sunday, a Palestinian from the Wad al-Hummus area in Sur Baher town, in the occupied capital Jerusalem, to demolish his home, allegedly for being built without a permit.

Hasan Breijiyya, the head of the Bethlehem office of the Wall & Colonization Committee, said the soldiers forced Mohammad Amira to demolish his 165 square/meter home.

Breijiyya added that the Palestinian received the order a few weeks ago and was informed that if he doesn’t demolish his property, the City Council would carry the demolition out using its workers and equipment and would force him to pay for the costs in addition to high fines and fees.

It is worth mentioning that Wad al-Hummus is subject to constant violations, including the demolition of dozens of homes, and pending orders for the destruction of many homes and buildings.

In July of 2019, Israel demolished eleven properties, consisting of seventy-seven apartments in Wadi al-Hummus, most of them are in Area C, under the control of the Palestinian authority.

In addition, the soldiers demolished a car repair facility in Beit Jala city, west of Bethlehem in the occupied West Bank, for the fifth time.

The soldiers also invaded Beit Furik town, east of the northern West Bank city of Nablus, before confiscating three tents, in addition to forcing the farmer out of his land.

Furthermore, the soldiers invaded Khirbat Ibziq village, in the Northern Plains of the occupied West Bank, and confiscated a Palestinian tractor.