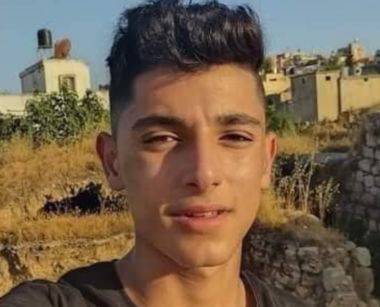 Israeli forces shot and critically wounded a 16-year old Palestinian boy on Wednesday in Beita village, and he died of his wounds on Thursday morning.

The child, identified as Ahmad Zahi Daoud Bani Shamsa, age 16, died at dawn Thursday, as a result of being shot in the head by the Israeli military on Wednesday.

He was taken to Rafidia Governmental Hospital, where he underwent an operation, but the doctors were unable to save his life.

The Head of the emergency department at the Palestinian Red Crescent in Nablus, Ahmad Jibril, told Palestinian reporters that the youth was taken to hospital with serious live gunshot wounds to the head.

It is noteworthy that this boy is the fourth Palestinian who was shot and killed by the Israeli military this year at protests at Jabal Sabih in Beita. The protests are challenging the Israeli development of an illegal Israeli settlement on stolen Palestinian land on Sabih mountain. In addition to Ahmad, three men were killed in the village by the Israeli military in May: Karim Maher Abdel Hamid Hamayel (28 years), Tariq Sanubar (27 years), and Issa Barham (42 years).

Speaking to Anadolu Agency, one witness of the shooting said that it took place during protests by residents of the town of Beita. They were voicing opposition to the establishment of a settlement outpost on their land in Jabal Sabih.

No Israeli military investigation has been launched, and no officers have been charged in the killing of these four Palestinian civilians in the village of Beita.