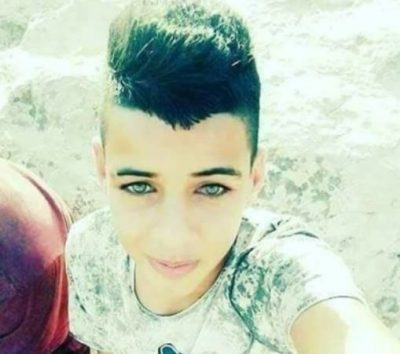 Jassem Nakhla, 17, suffered very serious wounds, on March 23rd 2017, after the soldiers opened fire at a Palestinian car, near the al-Jalazoun refugee camp, north of Ramallah. The shooting led to the instant death of Mohammad Hattab, 17, and the injury of three others. He died from his wounds on April 10th.

The Israeli army claimed the soldiers opened fire at the car after some of the passengers “hurled Molotov cocktails at a military tower”. But eyewitnesses contradicted that claim.

One eyewitness to the incident told Defense for Children International – Palestine (DCI) that Israeli soldiers opened fire at the car full of teenagers after it stalled near the Beit El settlement. The witness said that Mohammad al-Hattab, the 17-year-old driver, got out of the vehicle, but was immediately shot at by the Israeli soldiers.

Then, according to DCI, “The witness said Mohammad jumped back into the car to try to escape, but the car did not start. Israeli soldiers then approached the car and opened fire on the four children while inside the car:.

The 17-year old driver, Mohammad al-Hattab, shot twice in the torso, was declared dead upon arrival to a hospital. The three other teens were all shot in their upper bodies — all three have been in comas since they were shot on March 23rd.

The Palestinian government in the occupied West Bank called on the international community to intervene, and provide the needed protection to the Palestinian people, living under ongoing, illegal Israeli occupation, and escalating crimes.

Rishmawi added that Israeli soldiers have killed six Palestinian children since the beginning of this year, while at least 300 children are still held in Israeli prisons, detention and interrogation centers, facing torture, bad living conditions, and constant abuse.

Updated From: Apr 11, 2017 @ 02:20 :The Palestinian Health Ministry has reported that a teen , who was shot and seriously injured by Israeli army fire, on March 23, 2017, outside of Jalazoun refugee camp, north of Ramallah, in the occupied West Bank, has died from his wounds Monday.

The shooting led to the instant death of Mohammad Hattab, 17, and the injury of three others.

The Israeli army claimed that the soldiers opened fired at the car after some of the passengers “hurled Molotov cocktails at a military tower.”