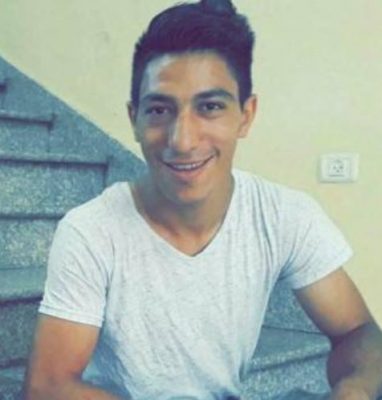 A 21-year old Palestinian, Raed As’ad Salhi, who was shot on August 9th during an Israeli military raid of Deheishe refugee camp in Bethlehem died of his wounds on Sunday.

Salhi had been shot multiple times in the chest and abdomen, puncturing his liver and landing him in critical condition at the Hadassah Hospital in Jerusalem, where he died of his injuries three weeks after being shot.

While he was being treated at the hospital, he was denied any visits by his family, and was heavily guarded by Israeli soldiers who considered him a prisoner.

He remained unconscious the entire time, until his death on Sunday. According to his brother Khaled, their mother had tried several times to visit him but was prevented. She suffers from several health issues, and was unable to sleep during the past three weeks after her child was shot.

In addition to keeping the unconscious youth under heavy guard, the Israeli military also abducted his brother and kept him for interrogation. Neither Raed nor his brother were ever charged with any crime.

The Israeli military stated that they entered the camp on August 9th to detain al-Salhi and another young men, but when the two young men ran away, the soldiers pursued them, and fired live ammunition at the two unarmed youth.

The Head of the Palestinian Prisoners Committee, Issa Qaraqe’, told reporters from the Ma’an News Agency that the Committee holds Israel responsible for the 21-year old’s death, and condemned the use of live ammunition by Israel in its invasion of the refugee camp.

Dr. Ra’fat Hamdouna, the head of the Prisoners’ Center for Studies, stated that the death of the wounded Palestinian should raise an international outcry, and bring attention to the issue of extrajudicial executions and medical neglect of dozens of Palestinian detainees.

Dr. Hamdouna added that the soldiers shot Raed from very close range, with the intent to kill him.

Hamdouna said that various Israeli officials, including Israeli Defense Minister Avigdor Lieberman, head of the right-wing ‘Yisrael Beitenu’ party, the head of the ‘Jewish Home’ party Naftali Bennett, and the Minister of Sports and Culture, Miri Regev, incited the acts of violence carried out by the Israeli military against Palestinian civilians through their racism and calls for ethnic cleansing.

Raed al-Salhi was a member of the leftist political party, the Popular Front for the Liberation of Palestine (PFLP). Following his death on Sunday, the PFLP issued a statement that, “Palestine, Deheishe camp, and the Popular Front for the Liberation of Palestine have lost a courageous struggler committed to liberation of the Palestinian people from Zionist occupation. This young man was committed in his veins with loyalty to the Palestinian cause and his people.”

In addition, the party stated that al-Salhi “was always present to confront the occupation in Bethlehem area”, and that he was involved in a number of volunteer activities in the camp to provide health and social activities for the residents.

He is the second young man to be killed by Israeli forces in Deheishe camp this summer. In July, 18-year old Bara’ Hamamda died of wounds sustained when Israeli forces fired numerous live bullets into his chest and upper body.

Al-Salhi is the 55th Palestinian killed this year by Israeli forces or militia members.