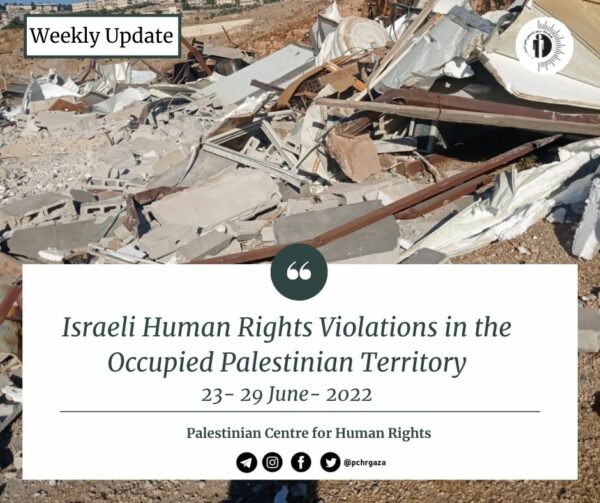 A Palestinian child was killed and 23 Palestinians, including a child and a woman were killed by Israeli Occupation Forces (IOF)’s fire, while dozens of others suffocated in IOF attacks in the West Bank, including occupied East Jerusalem. Details are as follows:

On 25 June 2022, Mohammed ‘Abdullah Suliman (16) succumbed to a head injury due to a lived bullet fired by IOF at him a day before at Silwad village entrance in Ramallah. More information is available here.

Meanwhile, those injured were victims of excessive use of force that accompanied IOF suppression of peaceful protests and gatherings organized by Palestinian civilians and they were as follows:

On 24 June 2022, 9 Palestinians sustained rubber bullet wounds in clashes that followed IOF’s suppression of Kafr Qaddoum weekly protest in northern Qalqilya. Also, a paramedic working for the Medical Relief Society was hit with a teargas canister in his face during IOF’s suppression of a peaceful protest against the confiscation of lands in Beit Dajan village in Nablus.

On 25 June 2022, five Palestinians, including a child, were wounded with rubber bullets in clashes that followed IOF’s suppression of Kafr Qaddoum weekly protest in northern Qalqilya.

On the same day, an elderly woman was hit with a teargas canister in her foot during IOF’s suppression of a protest organized by dozens of Kisan village residents, east of Bethlehem, against the presence of a crusher belonging to an Israeli settler near their houses in the village.

IOF assaulted the protestors and detained the head of the village council and his child for a while. Moreover, a Palestinian sustained a live bullet wound in his abdomen in clashes with IOF near a military checkpoint in Bab al-Zawiyia area in central Hebron.

On 26 June 2022, three Palestinians suffocated, and others sustained bruises after being assaulted during IOF’s incursion into An-Nabi Samuil village in occupied East Jerusalem. During their incursion, IOF arrested a Palestinian and confiscated construction tools and a bulldozer.

On 27 June 2022, a Palestinian was injured with a live bullet in his knee in clashes that accompanied IOF’s incursion into the eastern neighborhood in Jenin. IOF arrested four siblings, broke the rear window of their vehicle and withdrew.

Also, a Palestinian sustained a live bullet wound in his foot and a child sustained bruises after being beaten in clashes that accompanied IOF’s incursion into Jalazone camp, north of al-Bireh.  During IOF’s incursion, four Palestinians were arrested.

Moreover, 5 IOF shootings were reported on fishing boats off the Gaza Strip shore.

”So far in 2022, IOF attacks killed 64 Palestinians, including 49 civilians: 14 children, 5 women (one was a journalist Shireen Abu ‘Aqlah), a Palestinian stabbed by an Israeli settler and the rest were activists; 6 of them were assassinated. Also, 914 others were wounded in these attacks, including 103 children, 5 women, and 19 journalists all in the West Bank, except 15 fishermen in the Gaza Strip.

IOF demolished a house and a residential barrack, rendering a family of 2 persons homeless. Also, IOF demolished a commercial facility, 3 livestock tents, and 11 sheds. Details are as follows:

On 26 June 2022, IOF forced a Palestinian to demolish part of his house, where he and his wife with a disability live, in Wadi al-Joz neighborhood in occupied East Jerusalem, under the pretext of unlicensed construction.

On 29 June 2022, IOF demolished a grocery store near Jalamah checkpoint, north of Jenin, and notified to demolish 4 commercial facilities in the same area.

”Since the beginning of 2022, Israeli occupation forces made 78 families homeless, a total of 447 persons, including 91 women and 210 children. This was the outcome of IOF demolition of 78 houses and 40 residential tents. IOF also demolished 52 other civilian objects, leveled vacant areas of land, and delivered dozens of notices of demolition, cease-construction, and evacuation.

On 24 June 2022, Israeli settlers moved into Kisan village, east of Bethlehem, wrote racist slogans on the walls, and raised the Israeli flag on the top of the village’s mosque.

On 26 June 2022, Israeli settlers, from “Shilo” settlement, northeast of Ramallah, attacked Palestinian farmers, who were in their lands between Turmus_Ayya and Al-Mughayyir villages, east of the city. Also, IOF severely beat two Palestinians and set two vehicles on fire.

”So far this year, settlers carried out 154 attacks on Palestinians and their properties in the West Bank.

IOF carried out 175 incursions into the West Bank, including occupied East Jerusalem. Those incursions included raids and searches of civilian houses and facilities and establishment of checkpoints. During those incursions, 78 Palestinians were arrested, including 6 children and 2 women. Also, on 29 June 2022, IOF conducted a limited incursion into eastern al-Qarara village, east of Khan Yunis.

”So far in 2022, IOF established 2098 temporary military checkpoints and arrested 109 Palestinians at those checkpoints