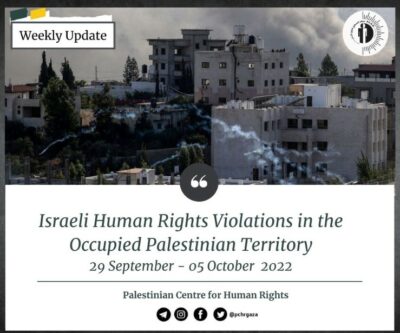 Five Palestinian civilians, including a child, were killed and 19 others, including 3 children and 2 journalists, were injured, while dozens of others suffocated in Israeli Occupation Forces (IOF) attacks in the West Bank, including occupied East Jerusalem. Details are as follows:

On 01 October 2022, as part of their excessive use of force, IOF shot dead Fayez Khaled Damdom (18) in al-‘Eizariya village in occupied East Jerusalem. (Details available in this press release).

On 03 October 2022, Salama Shari’ia (19) and Khaled ‘Anbar (21) were killed and a third one was injured before being arrested by IOF, who opened fire at a car those three were travelling under the pretext of their attempt to run over Israeli soldiers in Jalazone refugee camp in Ramallah. (Details available in this press release).

On 05 October 2022, ‘Alaa Nasir Zaghal (21) was killed after being shot with a live bullet in his head and 7 other Palestinians, including two journalists, were injured by IOF fire in clashes that accompanied IOF cordoning off a house after moving into Deir al-Hatab village, northeast of Nablus. Before their withdrawal, IOF arrested the Palestinian trapped in the house.

Meanwhile, those injured were victims of excessive use of force that accompanied IOF incursions into the cities and villages and suppression of peaceful protests organized by Palestinian civilians, and they were as follows:

On 29 September 2022, three Palestinians sustained wounds during clashes that accompanied IOF’s incursion into Dura village in Hebron. On the same day, a child was injured, and two Palestinians were arrested during clashes with IOF in Bab al-Zawiyia area, central Hebron.

On 30 September 2022, a child was shot with a rubber-coated bullet in his head and two Palestinians, including a child, were arrested during clashes with IOF near the 300 military checkpoint, north of Bethlehem. Also, five Palestinians, including a child, were injured by IOF fire during clashes that followed the latter’s suppression of Kafr Qaddoum weekly protest in northern Qalqilya.

On 01 October 2022, a child was shot with a rubber-coated bullet in his head during clashes with IOF in Al-Eizariya and Abu_Dis villages in occupied East Jerusalem, following the funeral of Palestinian teenager, Fayiz Damdoum, who was previously killed by IOF on the same day.

On 02 October 2022, two paramedics working for the Palestine Red Crescent Society (PRCS) sustained bruises after IOF stopped their ambulance and assaulted them when the paramedics were on their way to Beit Furik village after clashes broke out there.

IOF demolished 3 houses, rendering a family of 5 persons, including 3 children, homeless, handed a notice to another house, and confiscated construction materials in the West Bank. Details are as follows:

On 01 October 2022, IOF confiscated a generator and construction equipment after they raided an under-construction house in al-Jawaya village in Hebron, under the pretext of construction works in Area C without a prior permission.

On 02 October 2022, IOF demolished an under-construction house (104 sqms) in Irfa’iyia village in Hebron under the pretext of unlicensed construction.

On 03 October 2022, IOF demolished a house in eastern Hebron, under the pretext of unlicensed construction in Area C, rendering a family of 5 persons, including 3 children, homeless.

”Since the beginning of 2022, Israeli occupation forces made 116 families homeless, a total of 691 persons, including 133 women and 313 children. This was the outcome of IOF demolition of 124 houses and 41 residential tents. IOF also demolished 92 other civilian economic objects, leveled vacant areas of land, and delivered dozens of notices of demolition, cease-construction, and evacuation.

On 03 October 2022, Israeli settlers damaged 25 olive trees and windows of a house in Madama and Huwara villages, southeast of Nablus. On the same day, Israeli settlers threw stones at a PRCS ambulance that was transporting a sick woman; as a result, the ambulance right window was broken.

”Since the beginning of the year, settlers conducted at least 187 attacks. In two of the attacks, 2 Palestinians were killed.

IOF carried out 179 incursions into the West Bank, including occupied East Jerusalem. Those incursions included raids and searches of civilian houses and facilities and establishment of checkpoints. During those incursions, 66 Palestinians were arrested, including 11 children. In the Gaza Strip, on 30 September 2022, IOF arrested a Palestinian who tried to infiltrate via the border fence adjacent to northern Gaza Strip.

Israeli authorities announced crossings with the West Bank and Gaza Strip will be closed from Tuesday, 04 October 2022, to Wednesday evening, 05 October 2022, for the Jewish New Year.

On 04 October 2022, IOF closed most of the entrances to neighborhoods, villages, and intersections in occupied East Jerusalem, coinciding with the Jewish Yom Kippur Holiday.

”So far in 2022, IOF established at least 3,413 temporary military checkpoints and arrested 155 Palestinians at those checkpoints