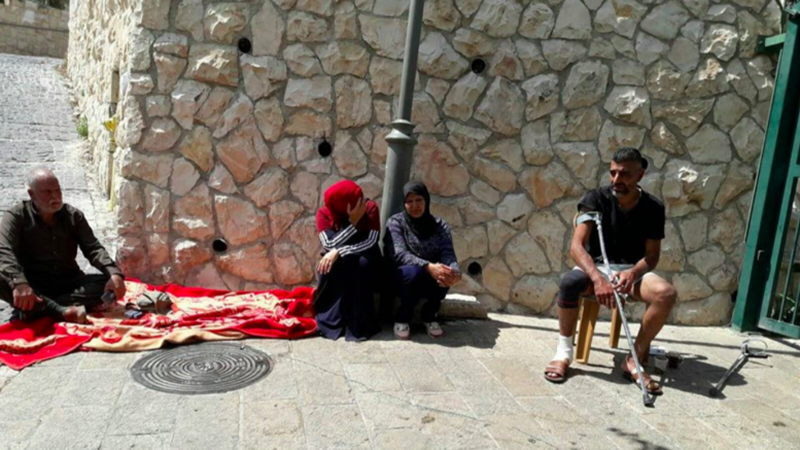 Members of the Ruweidi family after settlers take over their homes with the help of the Israeli police, April 8, 2018. Photo credit: the Wadi Hilweh Information Center.

Israeli police supervised the seizure, which displaced 13 members of the Ruweidi family.

Israeli police assisted colonial settlers seize a Palestinian-owned building in the East Jerusalem neighborhood of Silwan on April 8, 2018. The Ruweidi family lived in and owns the building, which consists of three apartments. Over 13 members of the family are now homeless.

“We are barred from entering [our homes], but the settlers and their guards are inside the houses,” Mahmoud Ruweidi told the Wadi Hilweh Information Center.

Prior to the seizure of the building, Israeli police closed the roads leading to it. Israeli forces then confiscated the Ruweidi family’s cellphones and oversaw settlers empty the building of its furniture and change the locks.

When members of the family resisted the sudden takeover, Israeli forces responded with physical violence. The Ruweidis’ belongings are now scattered in a nearby courtyard, exposed to the elements.

An Israeli court sanctioned the Ruweidis’ forced displacement in February when it ruled in favor of Elad, a settler group that claims one deceased member of the family sold it the three apartments.

The Ruweidis appealed the court decision and secured a court order postponing a settler takeover until April 15, 2018. They consequently had no warning settlers would confiscate their homes with the help of Israeli police a week earlier.

Israeli settlement watch group Peace Now reports that the police continue to guard the home around the clock while settlers move in furniture. In the last two years, Elad has seized ten Palestinian properties in Silwan.

Amalya Dubrovsky is the Editor of aicnews.org.