Soldiers Abduct A Palestinian, Injure A Child, Near Jenin 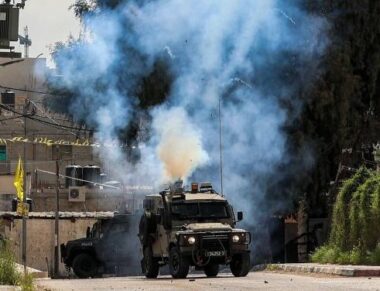 On Friday dawn, Israeli soldiers abducted a Palestinian and rammed a child with their jeep after the army invaded Burqin and Ya’bad towns, west of Jenin, in the northern part of the occupied West Bank.

Montaser Sammour, the head of the Jenin office of the Palestinian Prisoners’ Society (PPS), said that soldiers abducted Fadi Ziad Jarrar after invading and violently searching his home in Burqin town.

Sammour added that the soldiers also invaded and ransacked the homes of Osama and Nasser Sobeh and interrogated them.

In Ya’bad town, a Palestinian child, Mohammad Mahmoud Abu Baker, suffered fractures in the right leg after an Israeli military jeep rammed him near Kafrit village junction, south of Jenin, before being rushed to a hospital in Jenin.