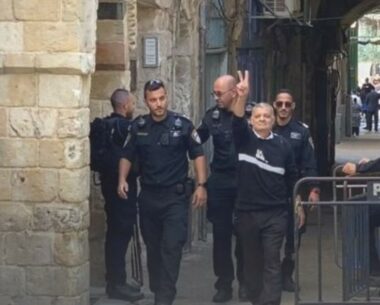 Updated: On Wednesday, Israeli soldiers abducted five Palestinians, including a young woman, near the Al-Aqsa Mosque compound in occupied Jerusalem, in the West Bank.

Update: The WAFA News Agency said the soldiers abducted a young woman who was not identified, in addition to two men, Na’el Jabarin and Mousa Ghousha, and added that the soldiers also abducted two women while leaving the holy site.

Media sources said the Palestinian was stopped by the soldiers near the Bab Al-Mathara area and was taken to Bab al-Silsila before he was moved to an unknown destination.

The soldiers also abducted a young woman after stopping her near Bab Al-Asbat while heading to the holy site.

The Palestinians were abducted amidst severe Israeli restrictions in and around the Al-Aqsa compound and surrounding areas after the army allowed hundreds of Israeli colonizers into the holy site.

The Islamic Waqf Department in occupied Jerusalem said hundreds of colonizers, divided into several groups, invaded the holy site to celebrate Yom Kippur after the soldiers and police officers surrounded and confined the Muslim worshipers into certain areas, in addition to preventing dozens from reaching the holy site, and detained some of them.