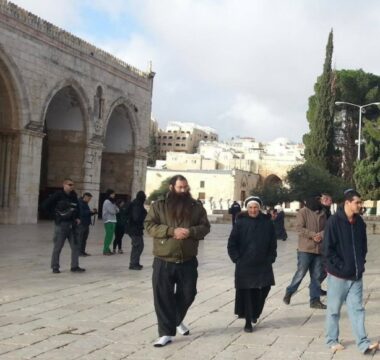 Israeli soldiers abducted, Wednesday, two Palestinians, including one woman, near the Al-Aqsa Mosque, in occupied Jerusalem, after groups of illegal colonizers conducted provocative tours in the holy compound.

The Palestinian Ministry of Waqf and Islamic Affairs, said dozens of colonizers, accompanied by soldiers and police officers, stormed the Al-Aqsa Mosque compound after the police assaulted many Palestinians and forced them away.

The Ministry added that the soldiers abducted its deputy director, Najeh Bkearat, who is also a former political prisoner, from the area of the Chain Gate, near Al-Aqsa.

It is worth mentioning that Hanadi was repeatedly abducted and interrogated by the soldiers and the police over the last several years, for protesting the constant violations against Al-Aqsa.

In related news, the soldiers abducted six Palestinians from their homes in Jaba’ and Burqin towns, in addition to the al-‘Arqa village, in the Jenin governorate, in the northern part of the occupied West Bank.

Also at dawn, dozens of Israeli soldiers invaded the Sheikh Jarrah Palestinian neighborhood in Jerusalem, and demolished two homes, in addition to abducting 27 Palestinians, including six members of the Salhiyya family.

On Tuesday evening, the soldiers forced three Palestinians to demolish a home and two stores in Jabal al-Mokabber and Shu’fat refugee camp, in the occupied Palestinian capital, Jerusalem, in the West Bank.