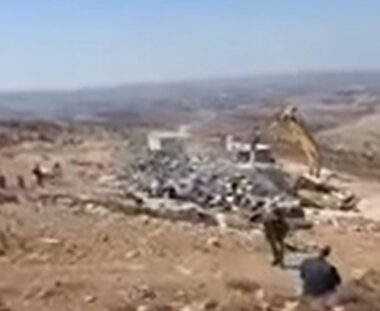 Several army jeeps and bulldozers invaded Khallet Taha, west of Doura town, southwest of Hebron, and demolished a 100 square meters home after forcing the family out.

Many Palestinians tried to help the family remove its furniture and belongings from their home before the soldiers fired live rounds, gas bombs, and concussion grenades, causing many to suffer the effects of tear gas inhalation before abducting two.

The soldiers assaulted Noah and his family while forcing them out of their home, wounding his wife, who suffered several lacerations and bruises.

Noah said this is the third time the army had demolished his home, starting in 2020 when it was still under construction, then again last year.

Khallet Taha is a frequently targeted area by the Israeli army and the colonizers in Hebron, especially since Israel is planning to illegally annex 3000 Dunams of Palestinian lands to build and expand its illegal colonies, including the planned expansion of the nearby Negohot colony.