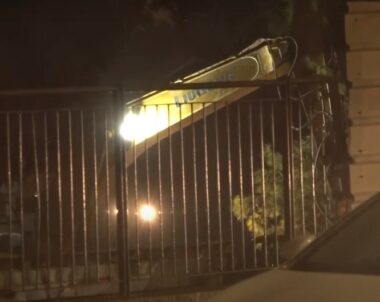 Dozens of Israeli soldiers invaded, on Wednesday at dawn, the Sheikh Jarrah Palestinian neighborhood in the occupied Palestinian capital, Jerusalem, and demolished two homes, in addition to abducting 27 Palestinians, including six members of the Salhiyya family.

Media sources said the invasion was carried out at 3 at dawn when the soldiers invaded the neighborhood and assaulted dozens of Palestinians who have been nonviolently protesting in solidarity with the Salhiyya family.

They added that the soldiers abducted 27 Palestinians, including six members of the Salhiyya family that owns the homes.

The soldiers then forced the two families, including women and children, out of their homes and proceeded to demolish them, rendering thirteen Palestinians homeless, in the cold and the rain.

The families were not allowed to remove their furniture and belongings from their homes.

Before invading the neighborhood and demolishing the homes, the soldiers imposed a tight siege on the entire area and prevented the Palestinians from entering or leaving it.

On Tuesday evening, Attorney Ahmad al-Qadamani who represents the families said he was waiting for a response from the Israeli High Court after he filed an appeal, adding that the City Council is alleging the homes are on public property and that it wants to build “public facilities,” while on the ground it is removing the native Palestinians who owned the homes and lands to replace them with colonizers.

He stated that the homes were built on private Palestinian lands before the year 1948, which means they predate Israel that was established in the historic land of Palestine, and before it occupied East Jerusalem in 1967.

The lawyer also said that the homes are heritage properties, protected by the United Nations and International Law.

He also said that the demolition, and the invasion into the property last Monday, came although an Israeli court is scheduled to hold a hearing on the issue on January 23rd.

It is worth mentioning that two days ago, the soldiers surrounded the Salhiyya homes and closed all streets leading to them, before attempting to demolish them, however, Mahmoud Salhiyya protested in the property with his children, and went to the roof with fuel, threatening to burn himself if the soldiers stormed the property. The demolitions of the homes aim at creating a link between the illegal Israeli colonies in the area, including the French Hill, in addition to the current construction of colonialist units in the area.

Sheikh Jarrah remains the target of dangerously escalating Israeli policies aiming at demolishing homes and removing at least 75 Palestinian families from their homes in the neighborhood, to replace them with illegal colonialist settlers.