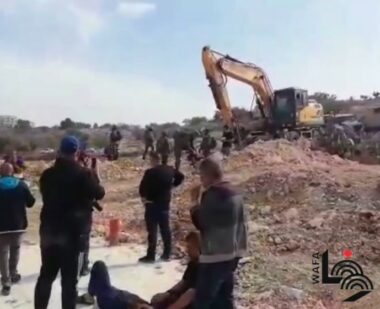 Emad al-Khawaja, the mayor of Ni’lin, told the Palestinian News & Info Agency (WAFA) that the Israeli military bulldozers demolished a well, owned by Fayez al-Khawaja on his own land, under the pretext that it is in a “natural reserve area.”

He added that the soldiers demolished the well just a few days after it was built and was made to hold more than 270 cubic meters of water for irrigation.

Many Palestinians protested the invasion and violation before the soldiers shot six with rubber-coated steel bullets and one who was beaten and struck with the soldiers’ rifles, in addition to dozens who suffered the effects of tear gas inhalation.