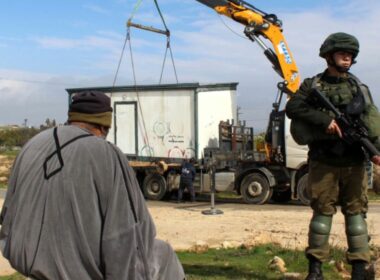 Marzouk Abu Na’im, the head of the -Mughayyir village council, said the well is owned by a local farmer, and was built on his land to irrigate his crops, in the northern part of the community.

Abu Na’im added that, two months ago, the soldiers demolished two wells owned by the same farmer, reportedly for being built without a permit from the so-called “Civil Administration Office, the administrative branch of the illegal Israeli occupation of Palestine.

Mo’taz Bisharat, a Palestinian official with Tubas governorate, said the sheds are owned by two local siblings who had to live in them after the soldiers demolished their homes in September of last year, under the pretext of being built without permits.