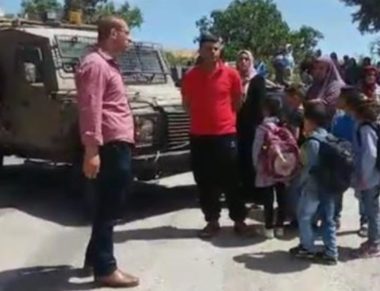 Israeli soldiers detained, Tuesday, five Palestinian teachers and one child, in Hebron’s Old city, in the southern part of the occupied West Bank, and held them in Keryat Arba’ illegal colony for several hours.

All of them are from Beit Kahil town, northwest of Hebron, and were on their way to al-Hajiriya School, in the Old City of Hebron.

Al-Jamal added that the school was unable to locate the teachers and the student, for more than five hours, before contacting the Palestinian police and the District Coordination Office, and realized that they were abducted by the soldiers and were held in Keryat Arba’ illegal colony, which was built on Palestinian lands, east of Hebron.

The five teachers and the child remained in detention for several hours, before the army decided to release them.

In related news, a group of illegal Israeli colonialist settlers uprooted many olive saplings in the al-Hamra area, east of Yatta town, south of Hebron.