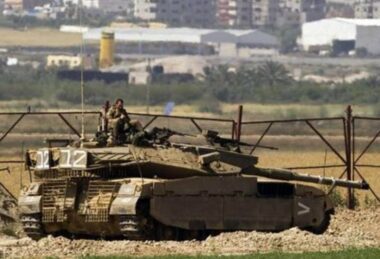 Several Israeli military vehicles invaded, on Tuesday morning, Palestinian farmlands in the northern and southern parts of the Gaza Strip.

Eyewitnesses said several military vehicles, including bulldozers, advanced dozens of meters into farmlands in Khuza’a town, east of Khan Younis, in the southern part of the Gaza Strip, and bulldozed sections near the fence.

In addition, several vehicles invaded farmlands near Beit Lahia, in the northern part of the coastal regions, and bulldozed sectioned near the fence.

It is worth mentioning that, on Monday, the soldiers carried a similar invasion into farmlands in Beit Lahia, while Israeli navy ships attacked Palestinian fishing boats near the shore of Gaza city.

In March of this last year 2021, the Palestinian Interior Ministry in Gaza said Israeli mines were responsible for an explosion that led to the death of three fishermen.