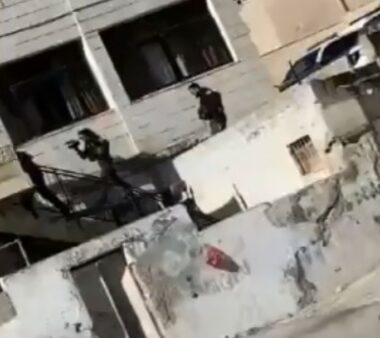 Dozens of Israeli soldiers, and several intelligence officers, invaded and ransacked, Monday, a Palestinian home, in occupied Jerusalem, and terrorized the entire family after a family member wrote a Facebook post calling for legally prosecuting the officer who killed a Palestinian last Saturday.

Media sources said the soldiers stormed the home of Jamal Nimir Mahmoud, in the al-‘Isawiya town in Jerusalem, after his son, Mahmoud, wrote a post on Facebook calling for the legal prosecution of the soldier who killed Mohammad Shawkat Salima, 25, in Jerusalem, on December 4, 2021.

His comment was referring to the second round of live fire that killed the Palestinian after he was struck by the first bullet and was lying on the ground.

In his post, Mahmoud said, “We need to document and publish the video that shows the [female] officer who killed Mahmoud after he was already neutralized so that she can be prosecuted.”

The post prompted an invasion into the family home, and a violent search campaign in the property, leading to excessive property damage, in addition to interrogating the family for several hours.

The soldiers also installed many roadblocks in the town, in addition to invading and searching several homes and shops, causing damage.