Soldiers Shoot A Palestinian And Abduct Him Near Qalqilia 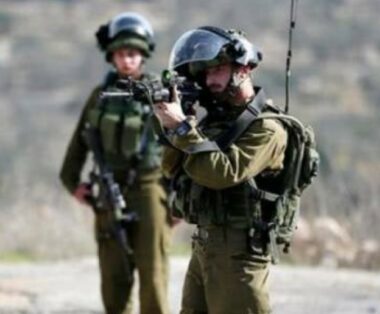 Israeli soldiers abducted, on Wednesday morning, a young Palestinian man after shooting him near Azzoun town, east of the northern West Bank city of Qalqilia. The soldiers also assaulted a man near Bethlehem, south of Jerusalem.

They added that the soldiers shot Mohammad Hussein Falah, 22, with a live round in the leg, before abducting him.

In addition, the soldiers assaulted Ahmad Ezzat Shakarna, 53, from Nahhalin town, west of Bethlehem, while crossing into the southern area of the al-Jab’a area, south of the city, causing cuts and bruises to various parts of his body.

On Wednesday at dawn, the soldiers abducted four Palestinians, including two teenage boys, from their homes in several parts of Bethlehem governorate.

In related news, several Israeli police officers, including undercover forces, abducted a Palestinian man after smashing the windows of his car and breaking into it while he was listening to music and broadcasting live on Facebook.