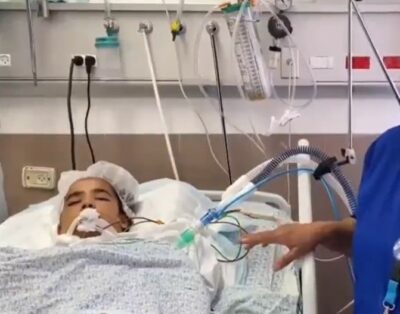 The three following videos were posted by the Wadi Hilweh Information Center In Silwan (Silwanic) in occupied Jerusalem.

Silwanic said the three children were transferred from Gaza to the Al-Makassed Hospital in Jerusalem late Tuesday night.

They were all seriously injured during the latest Israeli offensive on Gaza.

Ibtisam Ghrayyeb, the head of the Pediatric Department at the Al-Makassed Hospital, explained the conditions of the three children to Silwanic.

Lyan Musleh Sha’er, 11, was with her family at the beach in Gaza when the army fired missiles. She suffered shrapnel wounds to the head.

She was rushed to surgery in Gaza; the doctors tried their best to save her life and performed brain surgery before she was transferred to this hospital. But, frankly, only her heart is pumping. (Clinically dead)

Nayef Khaled al-Awadat, 9, from Gaza, suffered a direct shrapnel injury to the right side of his head. As a result, he suffered a serious skull fracture. In addition, part of his brain is protruding outside his head.

He has a preexisting heart condition and previously underwent heart surgery; he is in a coma, hooked to a respiratory machine, and is receiving a blood transfusion.

He was visiting his grandmother in Khan Younis when the army fired missiles when he was going to a shop.

The blast threw him high in the air before he suffered serious head wounds, especially to the skull and brain. His condition is extremely serious, and he will undergo surgery to attempt to save his life.

His aunt is accompanying him here at the hospital.

Mohammad Odai Abu Katifa,  9, suffered shrapnel wounds from a missile to the head and his right lung. He is in a coma and is hooked to a respiratory machine.

His grandmother is accompanying him because the Israeli missiles seriously injured his mother.

He was at a wedding, and the groom’s mother and her granddaughter were killed. He is receiving heart and blood pressure medications and is under close observation.

The grandmother needs psychological support, especially since her granddaughter died from serious wounds while preparations were being made to transfer her to this hospital, and her grandson was also killed.

What did they do wrong!? They are children loved by God, and all they want to do was to attend the wedding.

The grandmother said the army fired a missile at a jeep the family was driving and transporting the parents of the groom. Many family members and residents in the area were injured.