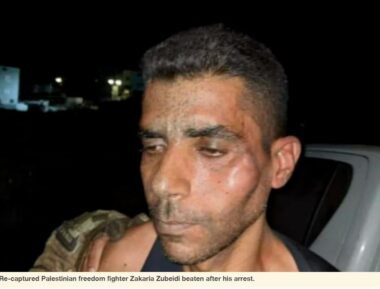 RAMALLAH, Monday, September 20, 2021 (WAFA) – Almost 200 human rights networks and organizations held the Israeli occupation state fully responsible for the lives and safety of the prisoners who liberated themselves from Gilboa prison two weeks ago and were re-arrested.

The 199 organizations demanded in a statement formation of an independent international investigation committee immediately to determine the conditions of their detention.

“The undersigned human rights institutions consider with great seriousness the testimonies of the lawyers of the re-arrested prisoners who succeeded in liberating themselves from the Israeli Gilboa prison,” they said.

Mahmoud and Muhammad Arda, Zakaria Zubeidi, Yacob Qadri, Ayham Kamamji, and Munadel Infeiat broke out of the extra-fortified Gilboa prison in northern Israel on September 6 after digging a tunnel from their cell to an area outside the prison wall.

Four of the prisoners were re-captured five days later and the other two re-captured on Sunday.

“According to the testimony of lawyers, the Israeli occupation forces assaulted them harshly from the moment of arrest, causing multiple bodily injuries, which necessitated hospitalizing some of them due to the difficult condition as a result of the use of unjustified violence and crimes of torture against them. They are also deprived of sleep, and interrogated after being completely stripped, according to the information provided so far, some of them have been threatened with death by interrogators, and their relatives have been arbitrarily arrested for the purposes of revenge,” said the rights organizations.

They charged that the treatment of the re-captured prisoners violates international and humanitarian laws.

The Palestinian and Arab human rights organizations demanded, among other things, “urgently” the “formation of an independent, impartial and honest international investigation committee of well-known competencies, to examine the circumstances of the arrest of the re-arrested prisoners in preparation for holding the perpetrators of violations accountable.”

The undersigned human rights institutions consider with great seriousness the testimonies of the lawyers of the re-arrested prisoners who succeeded in liberating themselves from the Israeli “Gilboa” prison. They are: (Mahmoud and Muhammad Arda, Zakaria Zubeidi, Yacob Qadri, Ayham Kamamji, Munadel Infeiat). According to the testimony of lawyers, the Israeli occupation forces assaulted them harshly from the moment of arrest, causing multiple bodily injuries, which necessitated hospitalizing some of them due to the difficult condition as a result of the use of unjustified violence and crimes of torture against them. They are also deprived of sleep, and interrogated after being completely stripped, according to the information provided so far, some of them have been threatened with death by interrogators, and their relatives have been arbitrarily arrested for the purposes of revenge.

There are also the practices aimed at breaking their resolve and will, and in clear violation of the provisions of international humanitarian law and international human rights law and their established principles related to persons deprived of liberty and the right not to be subjected to any forms of torture, humiliating, cruelty, and ill-treatment, in particular Article (5) of the Universal Declaration of Human Rights Articles (7, 9, 40) of the International Covenant on Civil and Political Rights, Articles (12-32) of the Third Geneva Convention of 1949, and Articles (90-98) of the Fourth Geneva Convention of 1949, and the Convention against All Forms of Torture and Other Forms of Cruel Treatment, or Degrading Treatment, and General Assembly Resolution No. (30/D/3452) of 1975 guaranteeing the protection of all persons from being subjected to torture and other cruel, inhuman or degrading treatment or punishment.

The human rights organizations stress that the colonial occupation and the racist apartheid regime in itself is a crime, and escaping from its prisons is motivated by the desire for liberation and emancipation and out of national dignity as well as a moral duty, heroism and honor that are protected by international conventions and covenants, whether the Brussels Declaration of 1874 or the Hague Convention of 1907 or my both Third and Fourth Geneva conventions, which has followed the example of many democratic countries, in addition to criminalizing torture against all persons and at all times expressly prohibiting torture of prisoners/detainees who take their freedom from prisons in particular, and suffice with the punishment for escape that causes damage to property and lives, which would be more stressed as the existence of the entire occupation and its prisons is an ongoing crime.

It should be recalled that the continued detention itself contradicts the essence and explicitness of Article (118) of the Third Geneva Convention on the Release of Prisoners of War, which necessitated their release without delay, which places a special responsibility on the Palestinian parties that signed The Oslo Accords but failed to compel Israel, the occupying power, to carry out its minimum duties, as the occupying country picked up this omission and historical mistake by ignoring the issue of prisoners in the settlement negotiations, by turning the prisoners’ file into a pressure card and political blackmail, and transforming their immediate release from a legal duty to an international mandate imposed on the occupying power to release them according to their desire under the name of “goodwill gestures”, the harm of which is magnified by accepting the geographical, temporal, and partisan division of prisoners on the basis of character and “harm”, and accepting their division into prisoners of the West Bank, prisoners of the Gaza Strip, and prisoners of Jerusalem, prisoners of 1948, the Arab prisoners, the prisoners classified as “blood on their hands” and other miserable classifications.

While human rights institutions condemn in the strongest and most severe terms the complete disregard for all these treaties, agreements, and charters, by continuing “Israel”, the occupying power, to follow systematic procedures and long-term policies at the executive, legislative, and judicial levels that lead to a systematic violation of the rights of detainees and prisoners in Israeli prisons within a colonial vision, which extended, in part, to their right to physical integrity and freedom from torture, and their right to guarantees of justice and health care. Human rights organizations stress that the suffering of detainees and prisoners has prompted them to use their empty stomachs to engage in open hunger strikes in protest against the widespread repression practiced against them, of which the Israeli Prison Service is an active part.

Attention must be drawn to the care of the law, as “Israel”, the occupying power, is the only country, along with the United States, that has officially legalized torture. In 1987, the Knesset approved the recommendations of the Landau Committee, and the recommendations of the Israeli officers and interrogators authorized the use of torture under the name of “physical pressure/enhanced interrogation,” while the Israeli Supreme Court issued Resolution No. (94/5100) in 1999, which confirmed the use special means of “physical pressure” in the event of an imminent security threat, to return in 2018 and expand this to include cases that do not constitute an imminent security threat, in a very clear confirmation of the integration of the pillars of the colonial system, including the legislative and judicial authorities.

While detainees and prisoners are subject to multiple and systematic methods of torture resulting from a policy of structural, legislative, practice and cultural violence against them, including ghosting, severe beatings, electric shocks, opening cold or very hot water with fluctuating air currents, sleep deprivation, suffocation, and waterboarding, burning of skin, shaking, that interrogators hold and shake the detainee regularly, vigorously, and very quickly until the detainee faints as a result of concussion, sleep deprivation, crucifixion of the detainee upside down, psychological torture using threats, solitary confinement, denial of visitation, and other brutal torture practices and that a number of prisoners and detainees did not survive to tell what happened, and those who survived were left with psychological trauma, physical pain, and permanent disabilities, The human rights organizations stress that the Israeli colonial self’s view is degenerate, lofty, and above the law, and the policy of impunity, is an essential part of the continuation of these practices without regard, which requires confronting it firmly and sternly by bringing the criminals to justice and redressing the victims, and makes the international official silence a direct partner.

Based on the foregoing, the Palestinian and Arab human rights organizations, undersigned below, recommend urgently the following: 1. The formation of an independent, impartial and honest international investigation committee of well-known competencies, to examine the circumstances of the arrest of the re-arrested prisoners in preparation for holding the perpetrators of violations accountable.

2. Calling upon peoples in Arab countries, and Arab communities abroad to form a state of pressure and effective advocacy for prisoners and detainees in occupation prisons, by mobilizing in various fields and raising their cause through social media platforms, in support of them.

3. Demanding the High Contracting Parties to the Geneva Conventions to fulfill their roles under the first common article in ensuring respect of the conventions, and transforming the legal duty under the conventions into actual conduct and practice, through maximum pressure on the occupying power for the purposes of accountability and deterrence.

4. The necessity for the International Criminal Court, which has jurisdiction in the occupied Palestinian territory, to prosecute the perpetrators of the crime of torture and to expand the scope of responsibility for it to include anyone who contributes in any way to it and to benefit from the sworn testimony of Palestinian human rights institutions.

5. Urging the Arab League and its various branches to play their role in supporting the prisoners and detainees, and activating their issues at the international level.

6. The necessity of the UN special rapporteurs, headed by the UN Special Rapporteur on the situation of human rights in the occupied Palestinian territory, and the Special Rapporteur on torture and other cruel, inhuman, or degrading treatment or punishment, to play their active roles in highlighting the crimes of systematic torture that are practiced against Palestinian prisoners and detainees, and raising the issue on the widest scale in the corridors of the United Nations.

7. The importance of following up on the conditions of prisoners and detainees and their families in all fields, and providing support and care for them from official and civil authorities, especially at the psychological, health, social, and legal levels.

9. Enhancing the Palestinian diplomacy to shed light on the issue of Palestinian prisoners in Israeli prisons in international forums, and work to mobilize international support and advocacy in the direction of preserving their human rights and stopping the systematic crimes of torture practiced against them.

10. Calling on Palestinian, Arab, and international civil society organizations to play their roles in the field of monitoring and documentation and to carry out pressure and solidarity advocacy efforts, and to benefit from the membership of the coalitions in which they participate, with regard to the crimes of torture that prisoners and detainees are subjected to and pressure towards their release.

11. Demanding the Human Rights Council at the United Nations to adopt the proposals of the Palestinian delegate in Geneva and to form a commission of inquiry into the violations against Palestinian prisoners in Israeli occupation prisons 12. Demanding the International Committee of the Red Cross to assume its legal and humanitarian tasks and responsibilities and to play its role effectively in communicating with prisoners and detainees, supervising and controlling their conditions in prisons, and informing their families of their conditions.

13. The traditional and modern Arab media shed light on the issue of prisoners and detainees on a permanent basis, in the context of mobilizing public opinion to rally around their issues.