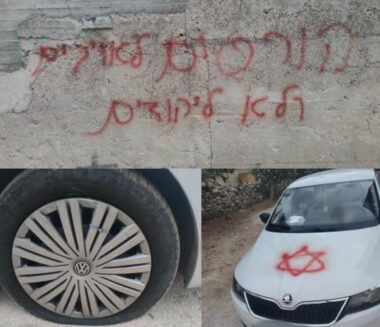 Settlers sneaked into Marda, village, to the north of the northern occupied West Bank city of Salfit, slashed tires of Palestinian-owned vehicles, and spray-painted racist and death slogans on walls and cars, reported WAFA correspondent.

In Awarta town, east of the city of Nablus, settlers chopped dozens of olive trees and sprayed pesticides on others virtually destroying them, according to Ghassan Daghlas, who monitors settler activities in the northern West Bank.

He said the settlers came from the illegal Itamar settlement built on illegally confiscated Awarta land.

Settlers yesterday uprooted 900 olive and apricot saplings and stole olive crops in the village of Sebastia, north of Nablus, as well as uprooted 70 trees in Masafer Yatta, south of the southern West Bank city of Hebron.

Israeli settlers’ violence against Palestinians and their property is routine in the West Bank and is rarely prosecuted by Israeli authorities.