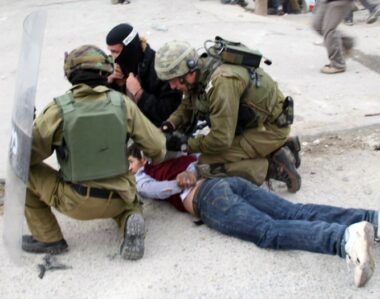 They said that Israeli forces and police rounded up 18 Palestinians in multiple raids across the Jerusalem district, including the occupied city of Jerusalem.

As part of the raids across the Jerusalem district, the gun-toting soldiers detained two Palestinians, including a former prisoner, and ransacked the houses of their families in Biddu town, northwest of the city.

The soldiers manning the intermittently staffed Jaba’ military roadblock, northeast of the city, stopped and detained another. The detainee was identified as a resident of the Jerusalem neighborhood of Hizma.

The heavily armed police barged their way into the Jerusalem neighborhood of at-Tour and abducted seven Palestinians; a couple along with their three children in addition to two sisters.

Undercover police, dressed in civilian clothes, detained another from al-Isawiya, a neighborhood of some 20,000 Palestinians where residents and constantly harassed by police and anyone, including children, run the risk of arbitrary arrest.

The sources confirmed that police abducted seven others, including at least two minors from the Silwan, Sheikh Jarrah and Wadi al-Jouz neighborhoods as well as from the vicinity of Bab al-Amoud and al-Maskobiyya detention and interrogation facility.

In Hebron district, a convoy of military vehicles stormed Beit Ummar town, north of the city, where the soldiers rounded up another.

They also rounded up four others: two minors from the southern part of Hebron city and two youths in the course of confrontations in the vicinity of al-Shuhada Street checkpoint.

In the northern West Bank, a resident of Askar refugee camp, located on the outskirts of Nablus city, was detained in the course of confrontations with Israeli troops at Huwwara checkpoint, south of the city.

In Qalqilia district, the sources confirmed a raid in Sir town, east of the city, leading to the detention of three others.

In Jenin district, the gun-toting soldiers detained another and seized his motorcycle at the junction leading to Rommana village, northwest of the city.