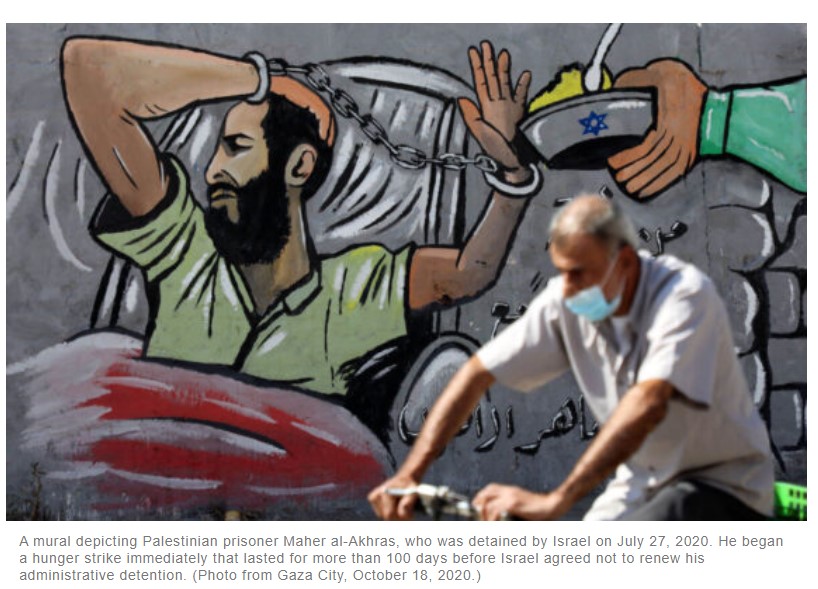 As Americans plan holiday meals and bake Christmas cookies, let’s be aware of the Palestinians who have been on hunger strikes – some for well over 100 days – just to obtain a basic right: to know why they’re in prison or be released.  by Kathryn Shihadah

A small group of Palestinian prisoners just spent weeks at death’s doorstep. Several are still there. They were on a hunger strike, demanding simple, basic rights that Israel refused to give – until the last second.

Many Americans are unaware of the common practice in Israel, known as administrative detention.

According to Addameer, a Palestinian prisoners’ rights organization, administrative detention is

a procedure that allows Israeli occupation forces to hold prisoners indefinitely on secret information without charging them or allowing them to stand trial.

The secret information or evidence cannot be accessed by the detainee nor his lawyer, and can according to Israeli military orders, an administrative detention order can be renewed for an unlimited time.

The court issues an administrative detention order for a maximum period of six months, subject to renewal.

Under international law, administrative detention is to be a last-resort action, as it robs individuals of basic human rights – but Israel uses it profusely.

Starting as early as 1968, Palestinian administrative detainees and political prisoners have participated in hunger strikes to call attention to Israel’s  violation of international law and inhumane treatment, including torture, poor medical treatment, and denial of family visits.

Just last week, Kayed al-Fasfous ended a 131-day hunger strike – that’s over 4 months – when Israeli authorities finally gave in to his simple demand: to know the charges against him or be released. He will be freed on December 14.

It is unknown whether Israel will ever reveal the charges against him.

Al-Fasfous, age 31, married with a young daughter, was detained in October 2020 for a 6-month term, which was then extended for another 6 months. When he learned that another 6-month term would be added – still without charges or trial – he began his hunger strike. That was July 15.

When his mother was allowed to see him in October, her son – a former bodybuilder – had lost over 65 pounds, but was handcuffed to his hospital bed.

Al-Fasfous has 7 brothers, all of whom have spent time in administrative detention; 3 are being held right now. Al Jazeera reports that twice, when one of the brothers was arrested in his home, Israeli soldiers assaulted his wife, causing her to miscarry both times.

Ayyad al-Hreimi recently agreed to end his 2-month hunger strike when Israeli authorities set his release date in March, 2022. He too was protesting his administrative detention without charges or trial.

Al-Hreimi was taken prisoner in April, and has spent 9 years behind bars. He is 28 years old.

Detainee Ala al-A’raj also recently ended his hunger strike after 103 days. His administrative detention was canceled, and Israel has agreed to file a formal indictment against him. Al-A’raj has been in prison since June.

According to the International Middle East Media Center, al-A’raj is “a former political prisoner who was repeatedly abducted and detained by Israel since the year 2007, and spent 5 years in prison.” He is 34 years old.

Israeli forces took Miqdad al-Qawasma into custody in January 2021. His hunger strike ended after 113 days, when Israeli officials agreed to a release date of February 2022, assuring that they will not extend his administrative detention at that time.

At the age of 24, al-Qawasma has already spent more than 4 years in prison.

Louay Al-Ashkar, a father of 8, conducted a 49-day hunger strike; he just reached an agreement with Israel on Sunday.

Hisham Abu Hawwash has passed the 100th day of his hunger strike, and is in serious condition. He is serving his 3rd consecutive term of administrative detention. At age 39, he has already spent 8 years in Israeli prisons for his resistance against the occupation.

One other Palestinian prisoner is also hunger striking to protest his administrative detention: Nidal Ballout, a father of 2, has been striking for just over a month. 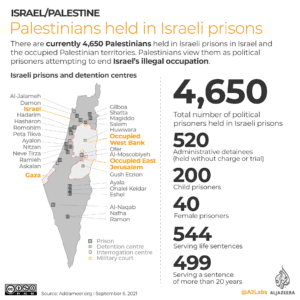 Recently, the United Nations declared, “As we have done many times before, we once again call on Israel either to charge and try, or release, all of the administrative detainees…Israel’s practices exceed all of the international legal boundaries.”

Richard Falk, former UN Special Rapporteur for Occupied Palestine, writes that Palestinian hunger strikers “are keenly aware that they are choosing an option of last resort, which exhibits a willingness to sacrifice their body and even life itself for goals deemed more important.”

He continues: “A hunger strike is an ultimate form of non-violence…physically harmful only to the self, yet possessing in certain circumstances unlimited symbolic potential to change behavior and give rise to massive displays of discontent by a population believed to be successfully suppressed.”

Indeed, Palestinians across the Holy Land have been rallying persistently for their peacefully-protesting brothers.

Falk describes how peaceful protest places oppressors in a tricky position: nonviolent action gives protestors a “decisive advantage symbolically” in what he calls the “legitimacy wars.” This causes the oppressor to “fight back, defame, and use violence to destroy by any means the will of the oppressed to resist.”

For example, in response to rights groups’ use of the “apartheid” label to describe Israel’s regime of control, and the Boycott, Divest, and Sanction (BDS) movement, Israel “mounted a worldwide defamatory pushback…shamelessly playing ‘the antisemitic card.”

The US plays a part in Israel’s bullying of peaceful protesters: we provide not just $10 million a day in military aid to Israel, but outsized support in Congress and the United Nations.

This is shameful. Americans should stand on the side of the oppressed – not bankroll the oppressor.

Our operations are funded solely by generous individuals like you. Your contribution will help us continue shining a light on the Israel/Palestine situation and the U.S. connection.

Kathryn Shihadah is an editor and staff writer for If Americans Knew. She also blogs occasionally at Palestine Home.