Egypt Uncovers Weapons Cache Believed To be Bound To Gaza 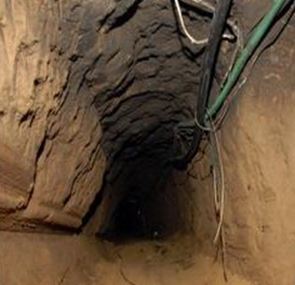 The Egyptian Security Forces managed to local and seize a large cache of missiles and mortars in an area in northern Sinai. The supplies are believed to be bound for the Gaza Strip.The El Youm Al Sabe’ (The Seventh Day) Egyptian paper, reported Thursday that the cache includes 100 antiaircraft missiles, 45 Rocket Propelled Grenades, and 40 explosive devices.

The paper said that the Egyptian officer in charge of security in northern Sinai, obtained information stating the smugglers are storing explosives and ammunition left from previous wars in the area.

Egyptian security sources stated that some smugglers use explosives left from previous wars in order to extract TNT, and smuggle it to Gaza through the tunnels.
Egypt previously located and confiscated dozens of tons of explosives in Sinai, and in the Egyptian city of Rafah.

The Egyptian Security Forces stormed the area in question, and managed to locate the weapons cache and supplies; no arrests were made.

The security forces conducted a search campaign in the area. The explosives will be detonated in a controlled manner.

The operation comes one day after the Egyptian security forces managed to uncover three tunnels in the Rafah area.

Egypt also confiscated 41 trucks used for smuggling operations into the Gaza Strip, and 40 additional vehicles were located after the police combed the area.

Four Palestinians were wounded Wednesday when the Egyptian Security Forces detonated a siege-busting tunnel in Rafah.