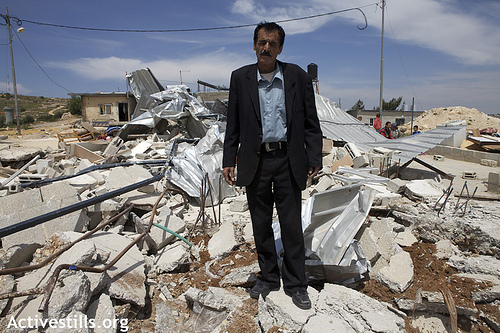 Israeli military demolished three houses in the West Bank on Wednesday in Al-Khader and Beit Sahour near Bethlehem and the village of Hares near Salfit.Israeli bulldozers demolished a house that belongs to Omar Ribhi from the town of Beit Sahour near Bethlehem on Wednesday afternoon. The house was still under construction when the bulldozers demolished it. The owner told IMEMC that he was planning to build a warehouse with an area of 1000 square meters, (appx 10,760 square feet).

Ribhi said that he received an order to stop the construction a year ago. When he complained at the Israeli military headquarters in Beit El, he was told that as long as he does not continue, there will be no demolition.

He told IMEMC that since then he put the construction on hold. An Israeli officer who accompanied the bulldozer told Ribhi that he will demolish the structure and failed to show a demolition order.

Shortly before noon, the Israeli military demolished the house of Ali Mousa from Al-Khader village near Bethlehem Wednesday morning.

Mousa, father of six, added, the Israeli general security service offered to pay him 3 million dollars to leave his house and his land, but he refused, adding that they want to force him out of the area at any cost.

The military refused to abide by an Israeli court ruling, brought to them by the Mousa’s lawyer to cease the demolition, and declared the area a closed military zone, and carried on with the demolition.

Earlier in the day, Israeli military vehicles demolished the house of Maher Sultan in the village of Hares near Salfit. The house is still under construction and consists of two stories and would be home to a family of 9 people.

Palestine News Agency (WAFA) said the Israeli authorities issued a warning few months ago that they will demolish the house, however Sultan asserted that the warning was not addressed to him, but to someone else.

He added however, that he complained to the Israeli court but received no response.