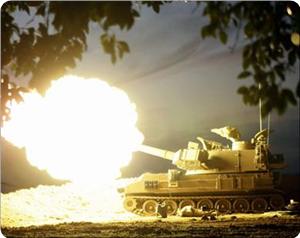 On Tuesday evening, Israeli tanks fired several shells into Khan Younis, in the southern part of the Gaza Strip, and into Dir Al Balah in central Gaza; damage was reported, no injuries. The Israeli army stated that it fired several shells after resistance fighters noticed under-cover forces infiltrating into the area, and exchanged fire with them.

Local sources reported that the tanks fired at least ten shells into an industrial area in Al Qarara, and into Wadi Al Salqa, west of the Kissufim military base.

The Al Quds Brigades, the armed wing of the Islamic Jihad, stated that its fighters noticed the undercover forces infiltrating through an area near Kissufim, and opened fire at them.

The army then fired several shells to provide cover for the undercover forces in order to withdraw after their plot was uncovered.