Biggest Solidarity Convoy To Sail To Gaza In Three Phases 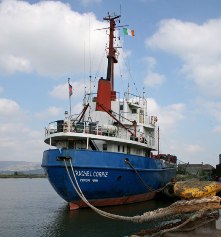 Independent Palestinian Legislator, head of the Popular Committee Against the Siege, Jamal El Khodary, stated that the biggest convoy of solidarity ships aimed at breaking the Israeli siege on Gaza will be sailing on three phases.In a press released issued Thursday morning, El Khodary said that the first solidarity ship will sail from Ireland to Greece on May 12.

He added that the eight ships will sail together from Greece and Turkey on May 22, and will reach Cyprus on May 26 to sail to Gaza on May 27.

The independent legislator stated that the activists are determined to reach the Gaza shore and will not bow to any Israeli threats, and added that the ships will carry sufficient supplies to enable the activists remain steadfast should they be
surrounded by the Israeli Navy.

The European Campaign to end the Siege on Gaza reported that the “Freedom Flotilla” is determined to sail to Gaza, to challenge the siege and blockage imposed on more than 1.5 million Palestinians in the Gaza Strip”.

In its statement, the European campaign stated that “Under the coordination of the Free Gaza Movement, numerous human rights organizations, including the Turkish Relief Foundation (IHH), the Perdana Global Peace Organization from Malaysia, the European Campaign to End the Siege of Gaza, and the Swedish and Greek Boat to Gaza initiatives will send three cargo ships loaded with reconstruction, medical and educational supplies. At least five passenger boats with over 600 people on board will accompany the cargo ships”.

Parliamentarians from different parts of the World, United Nations and Human Rights activists, Trade Union Activists and journalists we board the ship and head to Gaza in one of the largest coordinated efforts to challenge the illegal Israeli siege and to deliver humanitarian supplies.