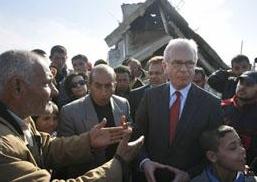 The Borders and Crossings Authority in the Gaza Strip reported Thursday that fifteen European parliamentarians entered the coastal region via the Rafah terminal, in the southern part of the Gaza Strip. They were welcomed by a delegation of the United Nations Relief and Works Agency for Palestine Refugees (UNRWA).

The parliamentarians will be touring Gaza to observe the dire situation caused by Israel’s war, and the ongoing siege.

They came to Gaza after coordinating their visit with the UNRWA and UN offices in the Gaza Strip.

The officials will visit some UNRWA –run schools, hospitals and areas heavily devastated by Israel’s bombardment.

The European delegation was forced to enter Gaza via Egypt after Israel denied them entry through the Erez Terminal. They issued a statement condemning the act.

There are seven Americans in the delegation, members of the American Association for International Concern.

The visiting officials said that they are on a humanitarian mission that has nothing to do with politics, and that they intend to stay in Gaza for a number of days.

But the Israeli government insists on its stance that allowing international officials to enter the Gaza Strip is considered as caving in to Hamas, and giving it legitimacy.

The Hamas movement achieved an overwhelming victory in the Palestinian elections of 2006 and garnered more than two-thirds of legislative council seats.

Israel refused to recognize the legitimacy of the Palestinian elections although they were monitored by international observers, and kidnapped dozens of elected legislators, ministers, mayors and officials.