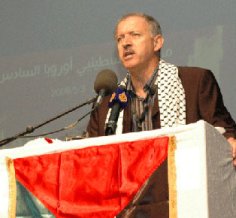 A leading human rights activist from Israel’s Palestinian Arab minority was charged yesterday with the most serious security offences on Israel’s statute book, including espionage.

Prosecutors indicted Ameer Makhoul, the head of Ittijah, an umbrella organisation for Arab human rights groups in Israel, with spying on security facilities on behalf of Hizbollah after an alleged meeting with one of its agents in Denmark in 2008.

Mr Makhoul, who had been held incommunicado by Israel’s secret police, the Shin Bet, for much of the time since his arrest three weeks ago, appeared in court and pleaded not guilty. In his first public statement, he told the court: “The Shin Bet controls the Israeli justice system.”

As a gag order was lifted on the case, his lawyers said Mr Makhoul had been tortured during his detention, including being told by interrogators that they would leave him “disabled”. The three lawyers said he had been forced to make a false confession, which they would argue was inadmissible.

Mr Makhoul’s arrest had angered many in Israel’s Palestinian minority, nearly a fifth of the population, who suspect he is being persecuted for his leading role in promoting internationally the boycott movement against Israel and his prominent opposition to Israel’s attack on Gaza nearly 18 months ago.

He has been backed by human rights groups abroad, including Amnesty International, which declared him a prisoner of conscience and accused Israel of “pure harassment”.

Mr Makhoul’s brother, Issam, a former MP for a joint Jewish-Arab party, told Israel Radio yesterday that Mr Makhoul had been threatened by the Shin Bet back in January 2009, shortly after he organised protests against the Gaza attack. The Shin Bet had told him that they would frame him and “make him disappear”, Issam Makhoul said.

Mr Makhoul’s wife, Janan, who saw her husband in court for the first time since he had been arrested, said he was in constant pain and had impaired vision. She added: “He is very exhausted and he told me about the torture he underwent in his interrogation. Thirty-six hours without sleep tied to a chair stuck to the floor.”
Mr Makhoul, 52, is charged with assistance to the enemy in a time of war, conspiracy to assist an enemy, aggravated espionage and contact with a foreign agent. According to the indictment, he passed on “strategic intelligence” to Hizbollah agents on at least 10 occasions via encrypted e-mails.

The militant Lebanese group is said to have used Mr Makhoul, whose organisation is based in the northern city of Haifa, to provide information on security installations in the north.

Mr Makhoul is alleged to have provided details of the locations of two Shin Bet facilities, a Mossad office, a military base and a Rafael armaments factory, as well as trying unsuccessfully to gather information on the security arrangements of Benjamin Netanyahu, the prime minister, and Ehud Barak, the defence minister.

A senior Shin Bet officer told the liberal Haaretz newspaper: “Part of the information that Makhoul transferred could be delivered by anyone with a pair of eyes and Google Earth [a computer program providing satellite images]. But Makhoul, as an Israeli Arab, has freedom of movement and access across Israel.”

Prosecutors also accused him of passing on the names of six Israelis as potential spies and providing analysis of trends in Israeli politics and society.

Hizbullah, prosecutors suggested, was especially keen to learn about its success in
hitting Israeli security installations with rockets during its military confrontation with Israel in 2006.

In a related case, Omar Said, 50, a pharmacologist and political activist, was charged yesterday in a Nazareth court with contacting and transferring information to Hizbollah after meeting an agent in the Sinai resort of Sharm El Sheikh. He denied the allegations and said he too had been forced into making a confession.

Hassan Jaja, a Lebanese businessman living in Jordan, is alleged to have initiated contacts between Hizbollah and Mr Said and Mr Makhoul.

The Adalah legal centre, which represents Mr Makhoul, said his indictment was based on a confession extracted during nearly two weeks in which he was denied a lawyer, kept in a small isolation cell, deprived of sleep and food, and shackled in a painful position to a small chair.

The combination of methods, known in Hebrew as the “Shabeh”, created high levels of mental stress and acute, continuous physical pain, said Abir Baker, a lawyer with Adalah.

The interrogation method violates international law and was banned by Israel’s supreme court in 1999.

Hasan Jabareen, head of Adalah, said that, when Mr Makhoul complained of serious pain, the interrogators tied him even tighter, threatening that he would be “left disabled”.

Issam Makhoul said the family was concerned that the court had denied his lawyers the right to see a medical report from a state physician who visited him twice during his interrogation.

Ms Baker said recent amendments to Israel’s security laws had given the Shin Bet “dangerous powers” to deny suspects the right to see a lawyer for up to 21 days, with limited judicial oversight.

Such powers were being used almost exclusively against Palestinian citizens held in detention, she said, though the state had refused to provide figures on how frequently the law was being employed.

She said, during periods when suspects could not see a lawyer, interrogators were more likely to use illegal torture methods.

A report by the Abu Dhabi-based National newspaper in January 2009 supports Issam Makhoul’s claim that his brother was threatened in an earlier Shin Bet interrogation. Mr Makhoul told the paper at the time that a Shin Bet officer “called me a rebel threatening the security of the state during time of war and said he would be happy to transfer me to Gaza”.

Mr Makhoul’s case, said Mohammed Zeidan, head of the Human Rights Association in Nazareth, had left everyone in Israel’s human rights community “afraid”. “The Shin Bet wanted to take him out of the game and they have succeeded,” he said. “Ameer has been disappeared.”

Mr Zeidan added that the case had strong echoes of what he called recent “unwarranted legal assaults” by the Shin Bet on two other Palestinian leaders in Israel.

Sheikh Raed Salah, of the popular Islamic Movement, was arrested in 2003 and spent two years in jail awaiting trial on charges of assisting a terror organisation before he was released in a plea bargain in which he admtted only financial misdemeanors.

Since 2007 Azmi Bishara, the leader of the Balad party, has been in exile after he was accused of espionage while out of the country. Critics say the Shin Bet effectively silenced him without having to produce evidence.

“It has become clear over the past few years that this could happen to any of us,” he said.

On Wednesday, in a related development, the parliament passed the first reading of a “loyalty bill”, introduced by the far-right Yisrael Beiteinu party, that would strip anyone found guilty of espionage of their citizenship.

Jonathan Cook is a writer and journalist based in Nazareth, Israel.