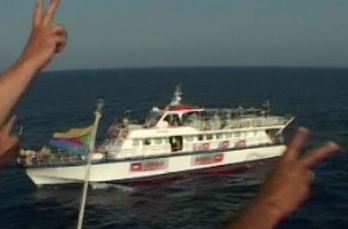 The Israeli Navy has scrambled all communications with the Freedom Flotilla, a convoy carrying hundreds of peace activists and tons of humanitarian supplies to the Gaza Strip.Al-Jazeera reporter said that the captain of one of the ships was seriously wounded after the navy violently attacked the ship, and even refused to allow him to receive medical treatment.

The army used rounds of live ammunition and gas bombs against the peace activists.

He added that the navy opened fire at the ships, attacked them from the sea and the air, and that all activists are now detained in their own ships.

Israel scrambled all communications in preparation to carry a full attack against the ships.

Al-Jazeera said that the navy attacked the ship in international territorial waters and that the army wants to conclude this massive attack before scrambling of communication.

It added there are reports of injuries, including serious injuries and likely two deaths, but could not confirm due to Israel’s media blackout and scrambling of communications.

The navy said it would fire missiles at the ships should they continue sailing towards Gaza.