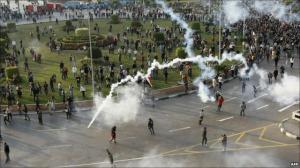 For the seventh day, the Egyptians continued their massive protests against the regime of Hosni Mubarak, and are preparing for the Million-man march planned to be held in Cairo on Tuesday. Abdul-Rahman Yousef, head of the National Committee for Change, stated in a phone interview with the al-Jazeera news agency in Qatar that Tuesday protest will be the largest, and will be the last stage before announcing a massive civil disobedience against the regime.

More protesters continued to arrive in Cairo despite the halt of train systems and the curfew that came into effect on Monday at three in the afternoon Egyptian time.

Reporter Isra’ Abdul-Fattah told al-Jazeera that the protesters continued to gather at the Tahrir Square in Cairo from one entrance as the army sealed all other entrances.

Several protests took place in Egypt mainly in Shabra, al-Jeeza, al-Doqqi and al-Maadi in Cairo demanding the removal of Mubarak.

The protesters also expressed rejection to the new government that was announced by Mubarak and included ministers who were in the previous government.

Outside of Cairo, protests continued in several cities including al-Mansura, Damanhur, Bani Sweif, al-Fayyoum and Alexandria.

Different opposition groups, including leftist factions, continued to gather in Tahrir Square to participate in the declared massive protest.

The protesters in Tahrir Square also formed a human chain shaped in the letters “Irhal”, which means “leave” in Arabic.

Besides the calls for the Million-man march, there was a call for a general strike in all facilities while a number of organizations had already granted their workers “open leave” from work. The strike originated from Suez and is expected to spread throughout Egypt.

Mubarak declared a new government that was sworn-in and, and under his orders, started talks with the opposition.

Former head of the International Atomic Energy Agency, presidential candidiate, Mohammad ElBaradei, called on Mubarak to step down and stated that the Egyptian demands are national unity, modifications on the constitution in addition to free and fair elections.

Isam al-Aryan, a senior member of the Muslim Brotherhood in Egypt, said that the brotherhood is discussing the issue of forming a negotiations committee that would hold talk with ElBaradei, and would also hold talks with the army.

He said that the Brotherhood does not take one-sided decisions without the rest of the national factions , and that it intends to hold talks with all groups in the country.

In an interview with CNN, ElBaradei urged the American President, Barack Obama, to urge Mubarak to step down, and added that the army in Egypt is unable to control the situation an issue that led to theft in several areas.

He added that Mubarak must leave the country sooner than later, and that he intends to hold talks with Omar Suleiman who was appointed by Mubarak as his first assistant. Suleiman is the head of the Egyptian Intelligence.

The Egyptian police resumed its cautious deployment in Cairo, while civil groups that was formed by the people continued to guard public and private institutions and facilities in cooperation with the army that was deployed in most districts in Egypt.

Egyptian security sources told al-Jazeera that the work of the security forces only involves maintaining security and does not involve direct contact with the protesters.

The official Egyptian Middle East News Agency reported that the police is currently searching for those criminal groups that committed theft and robberies.

The past six days of protests led to the death of more than 100 Egyptians, while more than a thousand were injured.