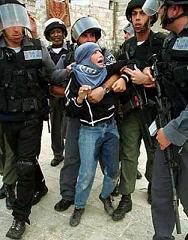 British newspaper, The Guardian, reported on Thursday that Israeli troops recently invaded the village of Nabi Saleh, known for being a center of non-violent resistance, and went house-to-house forcing children out of bed in the middle of the night to photograph them.The Guardian’s article also details some of the other mistreatment of Palestinian children by the Israeli military, referencing a recent report from Defence for Children International showing that eight recommendations made last year by the organization have not been carried out by the Israeli military and government.

These include detention of children without charge, forced interrogation of children with no lawyer or parent present, the failure to investigate reports of torture by Israeli forces against Palestinian children, the refusal to inform parents that their child has been detained and the holding of criminal proceedings against children in military courts, among others.

In the invasion of Nabi Saleh Wednesday night, residents reported that the soldiers said they plan to make a file of all the children in the village to use to identify any child that may later throw stones at the army.

The village of Nabi Saleh, home to around five hundred people, is one of several West Bank villages that hold weekly non-violent protests against the Israeli Annexation Wall that is being built on village land. At each protest, the Israeli army uses lethal and semi-lethal weapons to attack the non-violent demonstrators.

The inhabitants of the village say that they depend on international and Palestinian human rights organization to help document the illegal Israeli practices and violations of human rights by the Israeli military, in order to save their children from these practices.

The Guardian article also quotes a July 2011 report by Israeli human rights group B’Tselem which details the practice of photographing children in the night: ‘The photos were taken for what the army calls ‘mapping’: the army did not have any basis for suspecting any particular minor they awoke to photograph, but they wanted to build a reservoir of pictures they could later use for identification purposes, should the minor be involved in stone-throwing or other violent activity.

In response to a report on the issue broadcast by Israeli Channel 10 , the army said that ‘it uses a variety of means to maintain order and security’.’