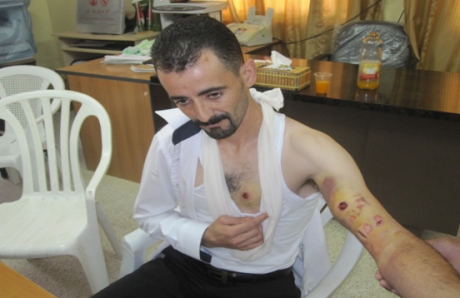 A total of 25 Palestinian civilians, including 6 children, and a French human rights defender were wounded this week.Israeli attacks in the West Bank:

Israeli forces conducted 36 incursions into Palestinian communities in the West Bank, during which they arrested 4 Palestinians, including a member of the Palestinian Legislative Council.

On Friday, 23 September 2011, Israeli forces killed a Palestinian civilian and wounded another 7, including a child, when they moved into Qasra village, southeast of Nablus, to provide protection to a group of Israeli settlers who raided Palestinian lands in the village.

A few minutes later, more Israeli troops arrived at the scene. An officer stepped down from one of the military vehicles and asked the soldiers to give the Palestinians two minutes to leave the area. He instructed the soldiers to fire tear gas canisters at the Palestinians if they did not obey orders to leave the area. The Palestinian civilians refused to obey the orders. Israeli forces immediately attacked them and fired more than 50 tear gas canisters at them. They fled to the nearest house in the village.

Additional Israeli troops then arrived at the scene and confronted the Palestinians, who threw stones at Israeli forces. The confrontations took place near al-Dowwar and al-Khazan areas in the south of Qasra village. The confrontations lasted for three hours and Israeli forces fired live and rubber-coated metal bullets against the Palestinian civilians. At approximately 16:20, Israeli forces extensively fired tear gas canisters at the Palestinian demonstrators near al-Khazan area and opened fire at one of the demonstrators, directly wounding him. The wounded Palestinian was identified as Isam Kamal Abed Badran, 37. He was hit by a bullet that entered the right side and exited from the left shoulder and was transferred to Rafidya Hospital in Nablus. Badran died despite doctors’ attempts to save his life. Another seven civilians, including a child, were wounded in the confrontations.

In the Gaza Strip, Israeli gunboats opened fire at Palestinian fishing boats in the Gaza Strip. On Thursday September 22nd, at approximately 07:45, Israeli gunboats stationed opposite to Beit Lahia beach in the northern Gaza Strip opened fire at Palestinian fishing boats which were near the shore. At approximately 08:00, Israeli forces boats approached the shore and destroyed fishing nets owned by Palestinian fishermen and pulled some fishing nets into the sea. As the Israeli boats approached the shore, Palestinian fishermen fled the area in fear for their lives leaving their equipment and fishing tools in the sea or at the beach. No casualties were reported. Five fishermen lost their nets in the incident.

It should be noted that Israeli gunboats carried out a similar attack on Tuesday morning, 20 September 2011, when they fired at Palestinian fishermen and at their boats, destroyed some fishing nets and pulled some other nets into the sea. Such attacks result in the loss of fishermen’s living resources and put their lives at risk.

Israel has continuously closed all border crossings to the Gaza Strip for over three years. The illegal Israeli-imposed closure of the Gaza Strip, which has steadily tightened since June 2007, has had a disastrous impact on the humanitarian and economic situation in the Gaza Strip.

The statistics which were made available to PCHR by the Border and Crossings Department indicate a continued drop in the number of truckloads of Gaza imports and exports.

On 22 September 2011, at least 10 Israeli settlers from “Oufra” settlement, northeast of Ramallah, set fire to olive and fig trees in Wad Zaghoura area in the west of Deir Jarir village. At least 40 dunums of agricultural land, including 100 olive trees and 40 fig trees, were burnt before villagers were able to extinguish fire.

On 24 September 2011, Israeli settlers raised large banners that had racist slogans against Arabs near some checkpoints, intersections and the entrances of Palestinian communities.

On 25 September 2011, Palestinian farmers in Qasra village, southeast of Nablus, found that Israeli settlers had uprooted 400 trees in Shu’ab al-Kharab area, which is located nearly 1,500 meters away from “Yish Kodish” settlement.

On the same day, Palestinian farmers in Douma village, southeast of Nablus, found that Israeli settlers had uprooted 150 trees in Shu’ab al-Kharab area, which is located nearly 1,500 meters away from “Yish Kodish” settlement.

On the same day, Israeli forces moved into Magharat al-Dab’a village, south of Qalqilya. They handed a notice to Hani Manasra ordering him to stop establishing a greenhouse in the village.

On the same day, Israeli settlers living in settlement communities inside and around Hebron launched a series of attacks against Palestinian civilians. In this context, a Palestinian civilian sustained burns to the eyes, the shoulder and the neck, and bruises throughout the body.

On the same day, during the funeral procession of two Israeli settlers who died in a car accident, which settlers blamed on Palestinian stone-throwing, to the Jewish cemetery near Tal Rumaida neighborhood in the center of Hebron, dozens of settlers attacked Palestinian houses using stones and empty bottles. Windows and doors of two houses were damaged. Israeli forces were present in the area, but did not intervene to stop the attack.

On 27 September 2011, a number of Israeli settlers raised racist banners against Palestinians on Tulkarem-Nablus road and near Ennab checkpoint, east of Tulkarem.

During the reporting period, the Israeli District Planning and Construction Committee approved a plane to construct 1,100 housing units in “Gilo” settlement, south of Jerusalem. The plan included the establishment of a footpath, a school, public buildings and an industrial zone. The units would be established on a 620-dunum area of land, and that those units constitute the first stage of a wider plan, as additional 600 units would be established in the future. It should be noted that the construction of 942 units was approved last August.

On 28 September 2011, Israeli forces handed notices to Palestinian civilians in Battir village, west of Bethlehem, ordering confiscation of 148 dunums of land planted with fruits, olives and vegetables belonging to at least 40 Palestinian families.

Following the Friday Prayer on 23 September 2011, dozens of Palestinian civilians and international and Israeli human rights defenders organized a peaceful demonstration in Bil’in village, west of Ramallah, in protest to the construction of the annexation wall. They raised the Palestinian flag and chanted slogans calling for ending the occupation and annexation wall and release of all Palestinian prisoners. Moreover, the demonstrators chanted ‘194 is the State of Palestine’ and released balloons and kites having the colors of the Palestinian flag. They raised banners calling the world for the recognition of the State of Palestine and carried the Libyan uprising flags and an American flag on which (veto) was written. They then moved towards areas of Palestinian land, which the Israeli High Court ordered to be returned to their Palestinian owners. When they reached (Abu Lemon) nature preserve, the demonstrators walked along the wall and released the balloons and kites. The demonstrators also used megaphones to call on Israeli settlers living in “Mitityaho Mizrach” settlement to leave it. Israeli soldiers stationed in the area fired rubber-coated metal bullets, sound bombs and tear gas canisters at the demonstrators. As a result, a number of demonstrators suffered from tear gas inhalation.

Also following the Friday Prayer on 23 September 2011, dozens of Palestinian civilians and international and human rights defenders organized a peaceful demonstration in Ne’lin village, west of Ramallah, in protest against the construction of the annexation wall. They chanted slogans calling for Palestinian reconciliation, adherence to the Palestinian inalienable rights and resistance of the occupation. Additionally, they chanted ‘194 is the State of Palestine’ and other slogans against the American President and his speech at the United Nations that was defended the Israeli occupation. They clashed with Israeli troops positioned near the annexation wall. Israeli soldiers fired rubber-coated metal bullets, sound bombs and tear gas canisters at demonstrators. As a result, a number of demonstrators suffered from tear gas inhalation.

Also following the Friday Prayer on 23 September 2011, dozens of Palestinian civilians and international and Israeli human rights defenders organized a peaceful demonstration in Nabi Saleh village, northwest of Ramallah, in protest against land confiscations and settlement activities. They raised the Palestinian flag, chanted slogans against the USA, called for ending the occupation and chanted ‘194 is the State of Palestine’. When the demonstrators attempted to reach areas of land seized by Israeli settlers near ‘Halmish’ settlement, Israeli soldiers fired rubber-coated metal bullets, sound bombs and tear gas canisters at them. As a result, Jihad Mohammed Tamimi, 22, was wounded by a bullet to the head, and the French activist, Chris Hoppy, 38, was hit by a tear gas canister to the right leg. They were both transported to Palestine Medical Complex in Ramallah for medical treatment. A number of demonstrators also suffered from tear gas inhalation and other sustained bruises.

Also following the Friday Prayer on 23 September 2011, dozens of Palestinian civilians from Ramallah and al-Bireh and human rights defenders organized a peaceful demonstration at the entrance of Qalandya refugee camp, north of Jerusalem, in support to the Palestinian leadership’s demand of recognition for the Palestinian statehood by the United Nations. They moved towards Qalandya checkpoint. They set fire to tires and threw stones and empty bottles at Israeli soldiers. Immediately, Israeli soldiers fired at the demonstrators. As a result, 17 Palestinians, including six children, were wounded and transported to Palestine Medical Complex in Ramallah. Additionally, dozens of demonstrators suffered from tear gas inhalation. (PCHR keeps the names of the wounded).

At approximately 13:30, following the Friday Prayer on 23 September 2011, dozens of Palestinian civilians and human rights defenders organized a peaceful demonstration in the center of Kufor Qaddoum village, northeast of Qalqilya. They moved towards the eastern entrance of the village, in protest against the permanent closure of the entrance since the beginning of al-Aqsa Intifada. Israeli soldiers fired sound bombs and tear gas canisters at demonstrators. As a result, a number of demonstrators suffered from tear gas inhalation.

Due to the number and severity of Israeli human rights violations this week, the PCHR made several recommendations to the international community. Among these were a recommendation that human rights organizations, bar associations, unions and NGOs continue their role in pressuring their governments to secure Israel’s respect for human rights in the Occupied Palestinian Territories and to demand Israel end its attacks on Palestinian civilians.

The PCHR also called upon the international community to pressure Israel to lift the severe restrictions imposed by the Israeli government and its occupation forces on access for international organizations to the Occupied Palestinian Territories.