New Government Will Not Be Formed Before Dec. 26 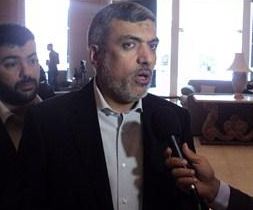 Member of the Political Bureau of the Hamas movement, Izzat al-Rishiq, stated that the Palestinian factions met on Tuesday to discuss the implementation of the Unity Agreement, and decided that general elections will not be held before December 26th.Al-Rishiq stated that the factions discussed, in-depth, all segments of the Unity Agreement, and decided to discuss the Palestinian Liberation Organization (PLO) file next Thursday with the participation of secretary-generals of all factions.

He further stated that the factions will start forming the central elections committee, and that they have already defined their representatives who will be holding meetings to present the names of the candidates for discussion and approval.

As for basic issues that affect the daily lives of the Palestinians, al-Rishiq said that all important issues such as passports, trust-building measures including the file of political prisoners in Gaza and the West Bank, are not concluded yet, but are at the top of the agenda.

He stated that the secretary-general of the factions will discuss, during their Thursday meeting, all of the above mentioned issues in addition to the issue of reforming the PLO.

As for the new interim government, al-Rishiq said that some issues will make it difficult to form it before December 26, and that Hamas respected the position of President Mahmoud Abbas, and some other Fateh movement leaders, to delay them until the above mentioned date.

Talking to Palestine News Network, Bassam Salhi, Secretary-General of the leftist Palestinian People Party, stated that it is still too early to raise the expectations, adding that the Palestinians are happy for any positive step that would improve the situation and avoid returning to square one.

He added that some core segments of the agreement are still unclear, and that they will be tackled in the upcoming meetings.