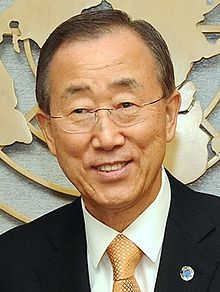 Ban Ki-Moon, the Secretary General of the United Nations, started a series of talks with both Israeli and Palestinians officials on Wednesday, by holding a meeting with Israeli President, Shimon Peres, in Jerusalem. He will also be heading to the West Bank city of Ramallah.His tour aims at convincing both Israel and the Palestinian Authority in the West Bank to continue the “exploratory talks” that were held in Amman under Jordanian mediation and supervision. The talks did not lead to any breakthrough.

The U.N. official said that the government on Benjamin Netanyahu must conduct what he called “good gestures” so that the meetings can be resumed, and called on the Palestinians to resume the Amman talks.

The Palestinian leadership said that the talks were deadlocked due to Israel’s refusal to accept a clear and time-sensitive agenda for peace negotiations, and for its refusal to halt its settlement activities.

Furthermore, Palestinian President, Mahmoud Abbas, will be consulting this coming Saturday with the Arab League, in order to make an informed decision of whether to halt the Jordan-mediated talks, or try another round.

Ban Ki-Moon will be holding talks with Netanyahu and Israeli Foreign Minister, Avigdor Lieberman. After the Tel Aviv talks, the Secretary-General will be heading to Ramallah for a meeting with President Abbas.

Israel claims that the Palestinians are not interested in peace talks with Tel Aviv, and is demanding that the talks be resumed without “preconditions”.

The Palestinian Authority said that it never placed preconditions for the resumption of talks, adding that its demands that Israeli must halt its violations and settlement activities are legitimate stances that are recognized by International Law.