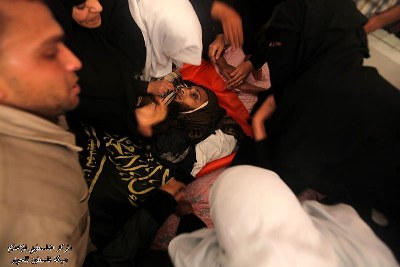 Palestinian medical sources in the Gaza Strip reported that two Palestinian were killed, on Saturday at noon, when the Israeli army fired a missile at their motorcycle, in Khan Younis, in the southern part of the Gaza Strip. The latest attack brings the number of Palestinians killed by the army since Friday evening to 14. Adham Abu Salmiyya, spokesperson of the Higher Committee for Emergency Services, reported that the two slain residents were identified as Mansour Abu Naseera, 20, and Hasan Al-Breem, 51.

The latest escalation was carried out while the residents of Gaza were performing the burial ceremonies of twelve Palestinians killed by the army on Friday, including the Secretary-General of the Popular Resistance Committees, Zuheir Al-Qaisi, and his deputy Mohammad Hanani.

Seven of the slain residents are members of the Al-Quds Brigades, the armed wing of the Islamic Jihad; they were identified as Mo’tasem and Ahmad Hajjaj, Fayeq Sa’ad, Shadi As-Seeqly, Hazem Qreiqe, Obeid Al-Gharabily, and Mohammad Harara.

Thousands participated in their funeral while hundreds of fighters fired round of live ammunition into the air, and vowed fierce retaliation.

Several resistance groups fired several homemade shells into a number of adjacent Israeli areas, and also fired a Grad missile into the Al-Majdal, and a mortar into Karem Abu Salem (Kerem Shalom) Crossing.

Israeli Ynet News reported that Palestinian fighters fired more that 90 shells , and that the Iron Dome system managed to intercept 25 out of 27 shells fired at Be’er As-Sabe’ (Beersheba), Ashdod, and Asqalan (Ashkelon).