Saadat: “Zionist War Criminals Are The Ones Who Must Be Prosecuted” 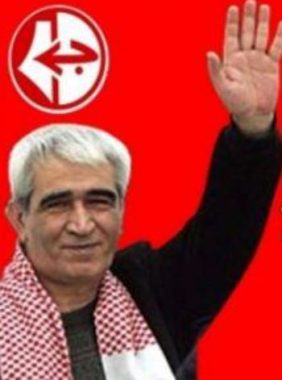 Imprisoned Secretary-General of the Popular Front for the Liberation of Palestine (PFLP), Ahmad Saadat, stated during a court session at the District Court in Jerusalem, that “Zionist leaders, and leaders of the criminal occupation are the ones who must be prosecuted, not the leaders of the Palestinian people, who are defending their land”.

The session is part of “legal proceedings” held by the District Court after an Israeli group known as “Shurat HaDin” filed a lawsuit against the Palestinian Liberation Organization (PLO) demanding compensation for Israelis, who also carry foreign nationalities, and “were killed by Palestinians”.

Lawyer Mahmoud Hassan, head of the Legal Unit at Ad-Dameer Prisoner Support and Human Rights Association, said that the Israeli Prison Authority moved Saadat from the Shatta Israeli prison to court against his will, and despite the fact that he remains determined not recognize the “legitimacy” of the Israeli occupation and its courts, and refused to answer questions.

The Judge asked Saadat for his opinion about the Prisoner Swap Deal that was conducted between Israel and the Palestinian resistance in Gaza, and whether he was disappointed because the deal did not include him, and Saadat said that “the liberty of the homeland is more precious and more important that my personal freedom; my freedom will be achieved sooner or later”.

At the end of the court session Saadat addressed that Judge and told him than those who practice terrorism are the leaders of Israel’s occupation, and added that the Palestinian people are defending their rights, and are conducting a legitimate struggle against an illegal and criminal occupation.

It is worth mentioning that soldiers of the Nachshon brigade prevented Saadat from hugging his first granddaughter, or even getting close to her.

Ad-Dameer stated that Israel’s courts are part of the illegal Israeli, and foreign, moves that aim at criminalizing the legitimate Palestinian resistance against the Israeli occupation, and come in direct violation of international law.

Ahmad Saadat was born in 1953 to a Palestinian family of refugees that lived in the destroyed village of Dayr Tarif near Ramleh.

Israel holds Saadat responsible for the assassination of far-right Israeli Tourism Minister, Rehavam Zeevi, who was killed, in 2001, in Jerusalem by four members of the PFLP; Israel claims he ordered the assassination. On 25 Dec 2008, an Israeli court sentenced him to thirty years in prison.

Saadat became the Secretary-General of the PFLP in 2001, after Israel assassinated Abu Ali Mustafa in his office in the central West Bank city of Ramallah.

More information on Ahmad Saadat can be found at The Campaign to Free Ahmad Sa’adat.