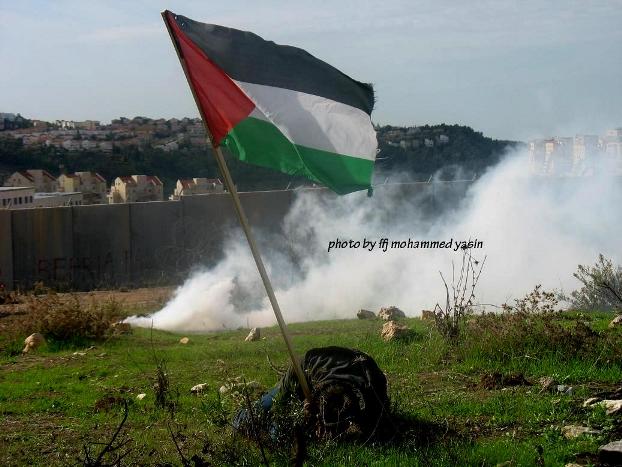 The Friends of Freedom and Justice Committee in Bil’in, near the central West Bank city of Ramallah, reported Friday that Israeli soldiers attacked the weekly nonviolent protest against the Annexation Wall and Settlements, built on villagers lands, and fired gas bombs at the protesters leading to dozens of injuries. Soldiers also attacked nonviolent protesters in Nabi Saleh, Al-Ma’sara and Kufur Qaddoum.The protest this week was called “Friday of solidarity with Palestinian detainees on hunger strike”.

Similar to previous weeks, the protest started following noon prayers in the center of the village, as dozens of local residents, Israeli and international peace activists marched while chanting slogans against Israel’s illegal Annexation Wall and its illegal settlements, and calling for the removal of the wall and for liberating all Palestinian political prisoners held by Israel.

As the protesters arrived at the Abu Lemon natural reserve, adjacent to the Wall, some locals managed to remove a section of the barbed wire fence close to the concrete Annexation Wall, and raised Palestinian flags on the concrete wall.

Israel soldiers, stationed on the other side of the Wall, fired tear gas bombs, concussion grenades and rubber-coated metal bullets at the protesters causing dozens of injuries among the protesters who suffocated after inhaling gas and received treatment by field medics.

The attack against the nonviolent protesters led to clashes between the soldiers and the residents who hurled stones at the attacking army; the clashes lasted for several hours.

The Committee called on the Palestinian people to stand in solidarity with the detainees who are facing constant harassment and very harsh conditions in Israeli prisons, especially the striking detainees held without charges or trial while Israel is trying to break their will, but they continue their strike despite their deteriorating health conditions, demanding their freedom.

In Nabi Saleh village, near Ramallah, dozens of nonviolent protesters were treated for the effects of tear gas inhalation.

The protest was held this week commemorating the third year since the villagers started their nonviolent protests against the illegal Israeli Annexation Wall and Israel’s illegal settlements built on Palestinian lands.

The army also attacked the nonviolent protesters in Kufur Qaddoum village, near the northern West Bank city of Qalqilia.

The protesters marched against the Wall and settlements, and expressed solidarity with Palestinian detainees holding hunger strikes in Israeli prisons.

Several residents, including two international solidarity activists were treated for the effects of tear gas inhalation.

The soldiers also attacked the weekly nonviolent protest against the Wall and Settlements in Al-Ma’sara village, near Bethlehem, leading to a number of injuries. 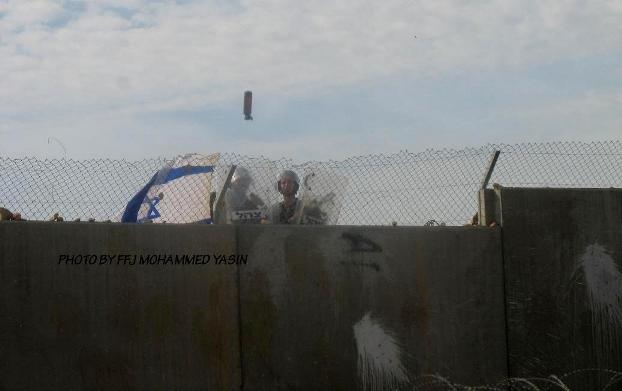 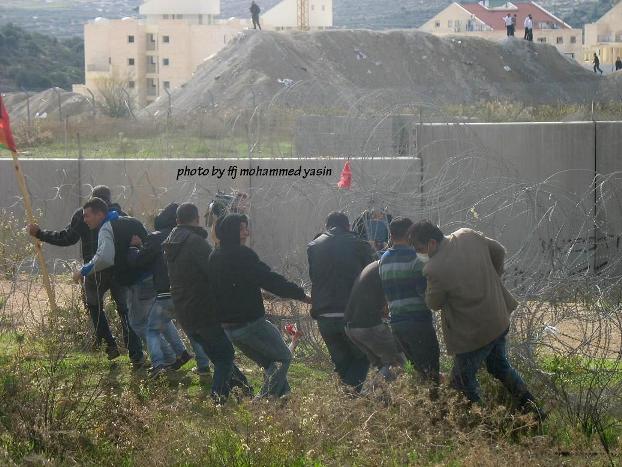