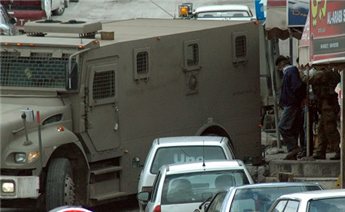 For the second day in a row, Israeli soldiers continued to occupy a Palestinian home in Huwwara village, south of the northern West Bank city of Nablus, despite the fact that the home is owned and inhabited by a Palestinian family.The Maan News Agency reported that Awwad Najm, spokesperson of the Fateh movement, stated that Israeli soldiers broke into the home of resident Ismail Khamis Al-Fakhoury, located on the main road of the village, close to the Power Station, and never left the property.

Najm said that dozens of soldiers are currently practically living in the property with the Palestinian family, including the children, adding that the family has been denied access to several rooms, and to their own freedom in their own property.

He called on human rights groups and international legal organizations to intervene and remove the soldiers from the Palestinian property, and stated that this is a direct and an outrageous violation of the family’s basic rights.