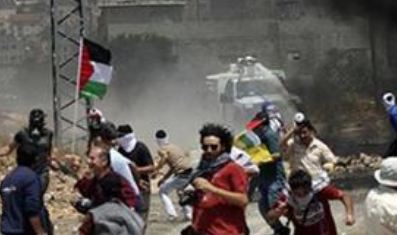 Israeli soldiers attacked, Tuesday, hundreds of Palestinians participating in a funeral of a child in Beit Ummar town, north of the southern West Bank city of Hebron; at least three residents have been injured.The Popular Committee Against the Wall and Settlements in Beit Ummar reported that the army attacked the funeral procession of a 13-year old child who died of a chronic disease.

The Committee added that the army was heavily deployed at the northern entrance of Beit Ummar, and conducted provocative acts against the residents leading to clashes with local youths.

It is worth mentioning that, on Monday at night, several Palestinian youths were injured, one seriously, after the army invaded Madama village, near the northern West Bank city of Nablus.

The army also kidnapped one resident, identified as Sami Rif’at, after breaking into his home in the village, and violently searching it, leading to property damage.