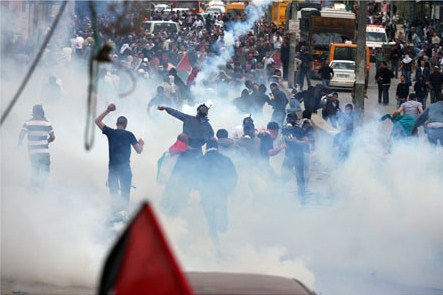 Thursday March 7, 2013; Media sources in the central West Bank city of Ramallah reported that clashes took place between Israeli soldiers and Palestinian youths in ‘Aboud village, north west of Ramallah, after Israeli soldiers detained the parents of Mohammad Asfour, who died Thursday of wounds he suffered two weeks ago when the army invaded the village.The Quds Press media agency reported that soldiers stationed at the entrance of the village, detained the parents and relatives of Asfour for several hours, an issue that led to clashes between the soldiers and local youths.

The army fired dozens of gas bombs, rubber-coated metal bullets and rounds of live ammunition; four residents have been mildly injured, and were moved to the Palestine Medical Center.

Mohammad Asfour, 22, died on Thursday morning after succumbing to injuries after being shot by a live round to the head on February 22nd when the army violently attacked Palestinians who marched in solidarity with Palestinian detainees holding hunger strike in Israeli prisons and detention camps.