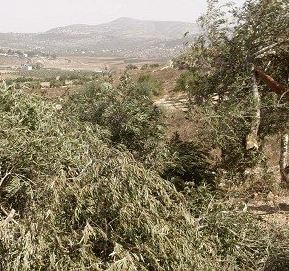 Friday March 29, 2013, Palestinian sources reported that a number of extremist Israeli settlers uprooted hundreds of olive saplings in the Al-Khader town, south of the West Bank city of Bethlehem.Ahmad Salah, coordinator of the Popular Committee Against the Wall and Settlements, reported that settlers of Nave Daniel settlement, built on Palestinian lands south of Al-Khader, attacked a Palestinian orchard that belongs to resident Mohammad Nabhan, and uprooted 200 saplings.

Salah said that the sapling were planted last year by the Young Men Christian Association (YMCA), and added that the settlers wrote graffiti stating (The Intifada Of Stones) in Hebrew.

He further stated that the attack was carried out amidst an Israeli decision to allow nearly 3000 settlers to enter the Solomon Pools area on Sunday, a move that was perceived as provocative to the residents of Al-Khader and other nearby Palestinian villages and towns.

The resident also stated that the Committee and the residents in the town will replant the saplings and will constantly watch the orchards in an attempt to prevent the settlers from repeating their attack.